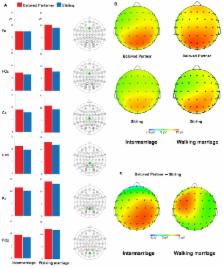 Research on familiar face recognition has largely focused on the neural correlates of recognizing a beloved partner or family member. However, no research has explored the effect of marriage style on the recognition of a beloved partner’s face, especially in matriarchal societies. Here, we examined the time course of event-related potentials (ERP) in response to the face of a beloved partner, sibling, or unknown person in a sample of individuals from the matriarchal Mosuo tribe. Two groups were assessed: intermarriage and walking marriage groups (i.e., couples in a committed relationship who do not cohabitate during the daytime). In agreement with previous reports, ERP results revealed more positive VPP, N250, and P300 waveforms for beloved faces than sibling faces in both groups. Moreover, P300 was more positive for beloved partner versus sibling faces; however, this difference emerged at fronto-central sites for the walking marriage group and at posterior sites for the intermarriage group. Overall, we observed that marriage style affects the later stage processing of a beloved partner’s face, and this may be associated with greater affective arousal and familiarity.

Updating P300: an integrative theory of P3a and P3b.

John Polich (2007)
The empirical and theoretical development of the P300 event-related brain potential (ERP) is reviewed by considering factors that contribute to its amplitude, latency, and general characteristics. The neuropsychological origins of the P3a and P3b subcomponents are detailed, and how target/standard discrimination difficulty modulates scalp topography is discussed. The neural loci of P3a and P3b generation are outlined, and a cognitive model is proffered: P3a originates from stimulus-driven frontal attention mechanisms during task processing, whereas P3b originates from temporal-parietal activity associated with attention and appears related to subsequent memory processing. Neurotransmitter actions associating P3a to frontal/dopaminergic and P3b to parietal/norepinephrine pathways are highlighted. Neuroinhibition is suggested as an overarching theoretical mechanism for P300, which is elicited when stimulus detection engages memory operations.

The neural correlates of maternal and romantic love.

Semir Zeki,  Andreas Bartels (2004)
Romantic and maternal love are highly rewarding experiences. Both are linked to the perpetuation of the species and therefore have a closely linked biological function of crucial evolutionary importance. Yet almost nothing is known about their neural correlates in the human. We therefore used fMRI to measure brain activity in mothers while they viewed pictures of their own and of acquainted children, and of their best friend and of acquainted adults as additional controls. The activity specific to maternal attachment was compared to that associated to romantic love described in our earlier study and to the distribution of attachment-mediating neurohormones established by other studies. Both types of attachment activated regions specific to each, as well as overlapping regions in the brain's reward system that coincide with areas rich in oxytocin and vasopressin receptors. Both deactivated a common set of regions associated with negative emotions, social judgment and 'mentalizing', that is, the assessment of other people's intentions and emotions. We conclude that human attachment employs a push-pull mechanism that overcomes social distance by deactivating networks used for critical social assessment and negative emotions, while it bonds individuals through the involvement of the reward circuitry, explaining the power of love to motivate and exhilarate.

V Bruce,  Janet A. Young (1986)
The aim of this paper is to develop a theoretical model and a set of terms for understanding and discussing how we recognize familiar faces, and the relationship between recognition and other aspects of face processing. It is suggested that there are seven distinct types of information that we derive from seen faces; these are labelled pictorial, structural, visually derived semantic, identity-specific semantic, name, expression and facial speech codes. A functional model is proposed in which structural encoding processes provide descriptions suitable for the analysis of facial speech, for analysis of expression and for face recognition units. Recognition of familiar faces involves a match between the products of structural encoding and previously stored structural codes describing the appearance of familiar faces, held in face recognition units. Identity-specific semantic codes are then accessed from person identity nodes, and subsequently name codes are retrieved. It is also proposed that the cognitive system plays an active role in deciding whether or not the initial match is sufficiently close to indicate true recognition or merely a 'resemblance'; several factors are seen as influencing such decisions. This functional model is used to draw together data from diverse sources including laboratory experiments, studies of everyday errors, and studies of patients with different types of cerebral injury. It is also used to clarify similarities and differences between processes for object, word and face recognition.