Function and regulation of phospholipid signalling in plants 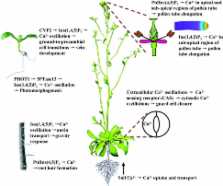 As an important metabolic pathway, phosphatidylinositol metabolism generates both constitutive and signalling molecules that are crucial for plant growth and development. Recent studies using genetic and molecular approaches reveal the important roles of phospholipid molecules and signalling in multiple processes of higher plants, including root growth, pollen and vascular development, hormone effects and cell responses to environmental stimuli plants. The present review summarizes the current progress in our understanding of the functional mechanism of phospholipid signalling, with an emphasis on the regulation of Ins(1,4,5) P 3–Ca 2+ oscillation, the second messenger molecule phosphatidic acid and the cytoskeleton.

CTR1, a negative regulator of the ethylene response pathway in Arabidopsis, encodes a member of the raf family of protein kinases.

J Kieber, M Rothenberg, G. Román … (1993)
We isolated a recessive Arabidopsis mutant, ctr1, that constitutively exhibits seedling and adult phenotypes observed in plants treated with the plant hormone ethylene. The ctr1 adult morphology can be phenocopied by treatment of wild-type plants with exogenous ethylene and is due, at least in part, to inhibition of cell elongation. Seedlings and adult ctr1 plants show constitutive expression of ethylene-regulated genes. The epistasis of ctr1 and other ethylene response mutants has defined the position of CTR1 in the ethylene signal transduction pathway. The CTR1 gene has been cloned, and the DNA sequences of four mutant alleles were determined. The gene encodes a putative serine/threonine protein kinase that is most closely related to the Raf protein kinase family.

Ruth Welti, Weiqi Li, Maoyin Li … (2002)
A sensitive approach based on electrospray ionization tandem mass spectrometry has been employed to profile membrane lipid molecular species in Arabidopsis undergoing cold and freezing stresses. Freezing at a sublethal temperature induced a decline in many molecular species of phosphatidylcholine (PC), phosphatidylethanolamine (PE), and phosphatidylglycerol (PG) but induced an increase in phosphatidic acid (PA) and lysophospholipids. To probe the metabolic steps generating these changes, lipids of Arabidopsis deficient in the most abundant phospholipase D, PLD alpha, were analyzed. The PC content dropped only half as much, and PA levels rose only half as high in the PLD alpha-deficient plants as in wild-type plants. In contrast, neither PE nor PG levels decreased significantly more in wild-type plants than in PLD alpha-deficient plants. These data suggest that PC, rather than PE and PG, is the major in vivo substrate of PLD alpha. The action of PLD alpha during freezing is of special interest because Arabidopsis plants that are deficient in PLD alpha have improved tolerance to freezing. The greater loss of PC and increase in PA in wild-type plants as compared with PLD alpha-deficient plants may be responsible for destabilizing membrane bilayer structure, resulting in a greater propensity toward membrane fusion and cell death in wild-type plants.

Heather Knight, Marc R. Knight (2001)
Plants exhibit a variety of responses to abiotic stresses that enable them to tolerate and survive adverse conditions. As we learn more about the signalling pathways leading to these responses, it is becoming clear that they constitute a network that is interconnected at many levels. In this article, we discuss the 'cross-talk' between different signalling pathways and question whether there are any truly specific abiotic stress signalling responses.