Contribution of transient and sustained calcium influx, and sensitization to depolarization-induced contractions of the intact mouse aorta 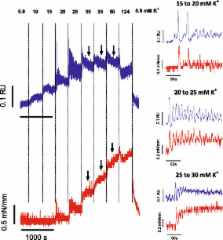 Intracellular Ca 2+ (Ca i 2+, Fura-2), membrane potential and isometric force were measured in aortic segments, which were clamped at fixed membrane potentials by increasing extracellular K + concentrations. K + above 20 mM evoked biphasic contractions, which were not affected by inhibition of IP 3- or Ca 2+ induced Ca 2+ release with 2-aminoethoxydiphenyl borate or ryanodine, respectively, ruling out the contribution of intracellular Ca 2+ release. The fast force component paralleled Ca i 2+ increase, but the slow contraction coincided with Ca i 2+ decrease. In the absence of extracellular Ca 2+, basal tension and Ca i 2+ declined, and depolarization failed to evoke Ca i 2+ signals or contraction. Subsequent re-introduction of external Ca 2+ elicited only slow contractions, which were now matched by Ca i 2+ increase. After Ca i 2+ attained steady-state, isometric force kept increasing due to Ca 2+- sensitization of the contractile elements. The slow force responses displayed a bell-shaped voltage-dependence, were suppressed by hyperpolarization with levcromakalim, and enhanced by an agonist of L-type Ca 2+ channels (BAY K8644).

The isometric response of mouse aortic segments to depolarization consists of a fast, transient contraction paralleled by a transient Ca 2+ influx via Ca 2+ channels which completely inactivate. Ca 2+ channels, which did not completely inactivate during the depolarization, initiated a second, sustained phase of contraction, which was matched by a sustained non-inactivating window Ca 2+ influx. Together with sensitization, this window L-type Ca 2+ influx is a major determinant of basal and active tension of mouse aortic smooth muscle.

2-aminoethoxydiphenyl borate (2-APB) is a reliable blocker of store-operated Ca2+ entry but an inconsistent inhibitor of InsP3-induced Ca2+ release.

M J Berridge,  Claire Peppiatt-Wildman,  Jemima Collins … (2002)
Since its introduction to Ca2+ signaling in 1997, 2-aminoethoxydiphenyl borate (2-APB) has been used in many studies to probe for the involvement of inositol 1,4,5-trisphosphate receptors in the generation of Ca2+ signals. Due to reports of some nonspecific actions of 2-APB, and the fact that its principal antagonistic effect is on Ca2+ entry rather than Ca2+ release, this compound may not have the utility first suggested. However, 2-APB has thrown up some interesting results, particularly with respect to store-operated Ca2+ entry in nonexcitable cells. These data indicate that although it must be used with caution, 2-APB can be useful in probing certain aspects of Ca2+ signaling.

K+ is an endothelium-derived hyperpolarizing factor in rat arteries.

S Dora,  Ellen Garland,  M Gardener … (1998)
In arteries, muscarinic agonists such as acetylcholine release an unidentified, endothelium-derived hyperpolarizing factor (EDHF) which is neither prostacyclin nor nitric oxide. Here we show that EDHF-induced hyperpolarization of smooth muscle and relaxation of small resistance arteries are inhibited by ouabain plus Ba2+; ouabain is a blocker of Na+/K+ ATPase and Ba2+ blocks inwardly rectifying K+ channels. Small increases in the amount of extracellular K+ mimic these effects of EDHF in a ouabain- and Ba2+-sensitive, but endothelium-independent, manner. Acetylcholine hyperpolarizes endothelial cells and increases the K+ concentration in the myoendothelial space; these effects are abolished by charbdotoxin plus apamin. Hyperpolarization of smooth muscle by EDHF is also abolished by this toxin combination, but these toxins do not affect the hyperpolarizaiton of smooth muscle by added K+. These data show that EDHF is K+ that effluxes through charybdotoxin- and apamin-sensitive K+ channels on endothelial cells. The resulting increase in myoendothelial K+ concentration hyperpolarizes and relaxes adjacent smooth-muscle cells by activating Ba2+-sensitive K+ channels and Na+/K+ ATPase. These results show that fluctuations in K+ levels originating within the blood vessel itself are important in regulating mammalian blood pressure and flow.

Alexander Dietrich,  Michael Mederos Y Schnitzler,  Maik Gollasch … (2005)
Among the TRPC subfamily of TRP (classical transient receptor potential) channels, TRPC3, -6, and -7 are gated by signal transduction pathways that activate C-type phospholipases as well as by direct exposure to diacylglycerols. Since TRPC6 is highly expressed in pulmonary and vascular smooth muscle cells, it represents a likely molecular candidate for receptor-operated cation entry. To define the physiological role of TRPC6, we have developed a TRPC6-deficient mouse model. These mice showed an elevated blood pressure and enhanced agonist-induced contractility of isolated aortic rings as well as cerebral arteries. Smooth muscle cells of TRPC6-deficient mice have higher basal cation entry, increased TRPC-carried cation currents, and more depolarized membrane potentials. This higher basal cation entry, however, was completely abolished by the expression of a TRPC3-specific small interference RNA in primary TRPC6(-)(/)(-) smooth muscle cells. Along these lines, the expression of TRPC3 in wild-type cells resulted in increased basal activity, while TRPC6 expression in TRPC6(-/-) smooth muscle cells reduced basal cation influx. These findings imply that constitutively active TRPC3-type channels, which are up-regulated in TRPC6-deficient smooth muscle cells, are not able to functionally replace TRPC6. Thus, TRPC6 has distinct nonredundant roles in the control of vascular smooth muscle tone.