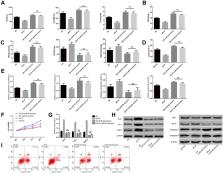 This research intended to study the mechanism of pravastatin in myocardial ischemia reperfusion (I/R) injury.

Myocardial I/R injury could lead to abnormal myocardial enzyme activity, inflammatory reaction and oxidative stress. However, pravastatin could significantly inhibit the activity of myocardial enzymes, alleviate inflammatory reaction and inhibit oxidative stress reaction, thus playing a protective role. Furthermore, cell experiments showed that pravastatin can alleviate the injury of H9C2 myocardial cells caused by I/R, inhibit the apoptosis of myocardial cells, and lead to a significant reduction in pro-apoptotic genes Bax, caspase-3 and caspase-9 transcription levels, an obvious increase in anti-apoptotic gene Bcl-2, and an increase in cell activity. After I/R induced injury, miR-93 level was significantly up-regulated and Nrf2 level was down-regulated. Over-expression of miR-93 or inhibition of Nrf2 expression would lead to further aggravation of I/R myocardial injury, increase the apoptosis rate of cells and decrease the activity of myocardial cells. Pravastatin administration could inhibit miR-93, activate and promote Nrf2 in myocardial tissue, and promote protein expression of downstream regulatory genes HO-1 and NQO1. In the I/R model, pravastatin was given. Over-expression of miR-93 or silencing Nrf2 could reverse the therapeutic effect of pravastatin on I/R.

Nrf2 as a key player of redox regulation in cardiovascular diseases.

I Dovinová,  M BARTEKOVA,  M Barancík … (2016)
The oxidative stress plays an important role in the development of cardiovascular diseases (CVD). In CVD progression an aberrant redox regulation was observed. In this regulation levels of reactive oxygen species (ROS) play an important role in cellular signaling, where Nrf2 is the key regulator of redox homeostasis. Keap1-Nrf2-ARE system regulates a great set of detoxificant and antioxidant enzymes in cells after ROS and electrophiles exposure. In this review we focus on radical-generating systems in cardiovascular system as well as on Nrf2 as a target against oxidative stress and a key player of redox regulation in cardiovascular diseases. We also summarize the current knowledge about the role of Nrf2 in pathophysiology of several CVD (hypertension, cardiac hypertrophy, cardiomyopathies) as well as in cardioprotection against myocardial ischemia/ reperfusion injury.

Shi-feng Chu,  Zhao Zhang,  Xin Zhou … (2018)
Ginsenoside Rg1 (Rg1), a saponin extracted from Panax ginseng, has been well documented to be effective against ischemic/reperfusion (I/R) neuronal injury. However, the underlying mechanisms remain obscure. In the present study, we investigated the roles of Nrf2 and miR-144 in the protective effects of Rg1 against I/R-induced neuronal injury. In OGD/R-treated PC12 cells, Rg1 (0.01-1 μmol/L) dose-dependently attenuated the cell injury accompanied by prolonging nuclear accumulation of Nrf2, enhancing the transcriptional activity of Nrf2, as well as promoting the expression of ARE-target genes. The activation of the Nrf2/ARE pathway by Rg1 was independent of disassociation with Keap1, but resulted from post-translational regulations. Knockdown of Nrf2 abolished all the protective changes of Rg1 in OGD/R-treated PC12 cells. Furthermore, Rg1 treatment significantly decreased the expression of miR-144, which downregulated Nrf2 production by targeting its 3'-untranlated region after OGD/R. Knockdown of Nrf2 had no effect on the expression of miR-144, suggesting that miR-144 was an upstream regulator of Nrf2. We revealed that there was a direct binding between Nrf2 and miR-144 in PC12 cells. Application of anti-miR-144 occluded the activation of the Nrf2/ARE pathway by Rg1 in OGD/R-treated PC12 cells. In tMCAO rats, administration of Rg1 (20 mg/kg) significantly alleviated ischemic injury, and activated Nrf2/ARE pathway. The protective effects of Rg1 were abolished by injecting of AAV-HIF-miR-144-shRNA into the predicted ischemic penumbra. In conclusion, our results demonstrate that Rg1 alleviates oxidative stress after I/R through inhibiting miR-144 activity and subsequently promoting the Nrf2/ARE pathway at the post-translational level.