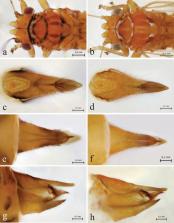 Based on chromosomal, molecular and morphological analyses, two new Cacopsylla Ossiannilsson, 1970 species are described, C. lapponica S. Nokkala & Ch. Nokkala, sp. nov. and C. borealis S. Nokkala et Ch. Nokkala, sp. nov. ( Hemiptera , Psylloidea ). C. lapponica is a rare bisexual alpine species living on Vaccinium uliginosum Linnaeus, 1753 above tree line on northern hills, where it forms sympatric populations with C. myrtilli W. Wagner, 1947. So far, the species has been found in northern Finland, Utsjoki and Kilpisjärvi, and in northern Sweden, Abisko. The chromosome number in males is 2n = 12+X(0), characteristic of psyllids. The species is easily distinguished from C. myrtilli by its conspicuously smaller size mainly due to difference in wing size. Additional morphological differences are found in the length of antennae, female genital plates and male parameres. C. borealis , in turn, is a relatively common apomictic parthenogenetic species with 5n = 60 + XXXXX living on the same host plant, Ledum palustre Linnaeus, 1753, as C. ledi (Flor, 1861) and occasionally forming sympatric populations with it. No males have been recorded in C. borealis . Its distribution range reaches at least from northern Fennoscandia to Lake Baikal in the East. C. borealis can be distinguished from C. ledi by differences in the length and width of antennae, dark brown markings on the wing and female terminal structures. For molecular analysis, a 638 bp fragment of the mitochondrial COI gene was sequenced. C. lapponica differs from the cohabitating C. myrtilli by 20 fixed nucleotide substitutions (uncor rected p-distance 3.13 %), while C. borealis differs from C. ledi by 21 fixed nucleotide substitutions (uncorrected p-distance 3.29 %). Molecular phylogeny construction (ML and BI) reveals two highly divergent clades, one comprising two bisexual species, C. lapponica and C. fraudatrix Labina & Kuznetsova, 2012, and the other clade comprising the parthenogenetic species C. borealis , C. myrtilli , and C. ledi . Within this clade, C. borealis is more closely associated with C. myrtilli than with C. ledi .

S Nokkala,  V G Kuznetsova,  C Nokkala (2015)
Using a cytological approach, diploid females were found coexisting with rare males in triploid apomictic parthenogenetic populations of the psyllid Cacopsylla myrtilli (W. Wagner, 1947) in Norway, Sweden, Finland and northwest Russia. Diploid females were easily distinguished from triploid apomictic females by the presence of 13 chiasmate bivalents instead of 39 univalent chromosomes at metaphase I. Abundance equaled that of males, but the proportion of males and diploid females was significantly greater in high altitude compared with low altitude populations. Males mated with females but showed no mating preference for diploid females. Lack of genuine bisexual reproduction owing to either asynaptic meiosis in males, or rarity of males with normal meiosis, suggests that diploids are produced in every generation by parthenogenetic females as reversals from triploidy, with their production being enhanced by environmental factor(s) associated with high altitude. This is further supported by the observation that within a population the COI haplotype found in rare males was the same as that in parthenogenetic triploid females. Thus, in northern Europe parthenogenesis in C. myrtilli is obligate, geographic parthenogenesis. Bisexual populations of C. myrtilli should be looked for in Central and Southern Europe. From the evolutionary point of view, the presence of males and diploid females with normal meiosis in parthenogenetic populations could be significant as they exhibit the potential to re-evolve either a new sexual species of parthenogenetic ancestry or a new parthenogenetic species by contagious parthenogenesis.

The Psylloidea (Homoptera) of Fennoscandia and Denmark