Prevalence of psychological symptoms among Ebola survivors and healthcare workers during the 2014-2015 Ebola outbreak in Sierra Leone: a cross-sectional study 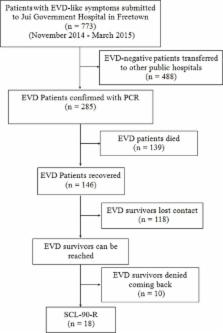 The 2014–2015 Ebola epidemic was considered to be the largest and most complex outbreak, which caused 11,310 reported deaths. The epidemic disease can cause a mental health crisis, however, there is only a small amount of scientific literature available related to this health issue so far. We evaluated the psychological symptoms of 161 participants including Ebola survivors and healthcare workers in Sierra Leone, analyzed the impact of job classification, education level on psychological status. We found that the order of total general severity index (GSI) scores from high to low was EVD survivors, SL medical staff, SL logistic staff, SL medical students, and Chinese medical staff. There were 5 dimensions (obsession-compulsion, anxiety, hostility, phobic anxiety, and paranoid ideation) extremely high in EVD survivors. GSI were associated with university education negatively. We believed our information is necessary to develop the comprehensive emergency response plan for emerging infectious disease outbreak.

DIH Simpson, IM Deng (1978)
A large outbreak of haemorrhagic fever (subsequently named Ebola haemorrhagic fever) occurred in southern Sudan between June and November 1976. There was a total of 284 cases; 67 in the source town of Nzara, 213 in Maridi, 3 in Tembura, and 1 in Juba. The outbreak in Nzara appears to have originated in the workers of a cotton factory. The disease in Maridi was amplified by transmission in a large, active hospital. Transmission of the disease required close contact with an acute case and was usually associated with the act of nursing a patient. The incubation period was between 7 and 14 days. Although the link was not well established, it appears that Nzara could have been the source of infection for a similar outbreak in the Bumba Zone of Zaire.In this outbreak Ebola haemorrhagic fever was a unique clinical disease with a high mortality rate (53% overall) and a prolonged recovery period in those who survived. Beginning with an influenza-like syndrome, including fever, headache, and joint and muscle pains, the disease soon caused diarrhoea (81%), vomiting (59%), chest pain (83%), pain and dryness of the throat (63%), and rash (52%). Haemorrhagic manifestations were common (71%), being present in half of the recovered cases and in almost all the fatal cases.Two post mortems were carried out on patients in November 1976. The histopathological findings resembled those of an acute viral infection and although the features were characteristic they were not exclusively diagnostic. They closely resembled the features described in Marburg virus infection, with focal eosinophilic necrosis in the liver and destruction of lymphocytes and their replacement by plasma cells. One case had evidence of renal tubular necrosis.Two strains of Ebola virus were isolated from acute phase sera collected from acutely ill patients in Maridi hospital during the investigation in November 1976. Antibodies to Ebola virus were detected by immunofluorescence in 42 of 48 patients in Maridi who had been diagnosed clinically, but in only 6 of 31 patients in Nzara. The possibility of the indirect immunofluorescent test not being sufficiently sensitive is discussed.Of Maridi case contacts, in hospital and in the local community, 19% had antibodies. Very few of them gave any history of illness, indicating that Ebola virus can cause mild or even subclinical infections. Of the cloth room workers in the Nzara cotton factory, 37% appeared to have been infected, suggesting that the factory may have been the prime source of infection.

N. Schmitz, N Hartkamp, J Kiuse … (2000)
The Symptom Check-List-90-R (SCL-90-R) is a widely used psychological status symptom inventory. The properties of the German SCL-90-R version were studied in two clinical samples: psychosomatic outpatients and primary care patients. The data were compared with a German community sample. The internal consistency, measured by Cronbach's alpha coefficients, was found to be high, for the global scale and all original subscales. Mokken scale analysis indicated hierarchical structure for most of the subscales. Concurrent validity, evaluated by studying the relationship between the SCL-90-R subscales and the Inventory of Interpersonal Problems (IIP-C) and the General Health Questionnaire (GHQ-12) was also high. On the basis of receiver operating characteristic (ROC) analyses, it was found that the SCL-90-R was able to differentiate between subjects known to have a given psychological disorder and those who do not. Results of exploratory and confirmatory factor analysis failed to support the original nine factor model and two subsequent factor models. The strong interdependence of the original subscales and the strong first unrotated factor of the exploratory factor analyses raised concern regarding the multi-dimensionality of the SCL-90-R subscales. We concluded that the SCL-90-R is a useful tool for measuring psychological status, measuring change in outcome studies, or screening for mental disorders.