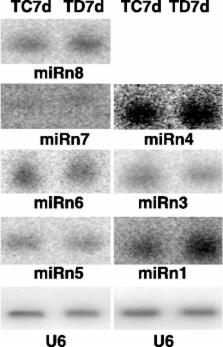 Botrytis cinerea Pers. Fr. is an important pathogen causing stem rot in tomatoes grown indoors for extended periods. MicroRNAs (miRNAs) have been reported as gene expression regulators related to several stress responses and B. cinerea infection in tomato. However, the function of miRNAs in the resistance to B. cinerea remains unclear.

The miRNA expression patterns in tomato in response to B. cinerea stress were investigated by high-throughput sequencing. In total, 143 known miRNAs and seven novel miRNAs were identified and their corresponding expression was detected in mock- and B. cinerea-inoculated leaves. Among those, one novel and 57 known miRNAs were differentially expressed in B. cinerea-infected leaves, and 8 of these were further confirmed by quantitative reverse-transcription PCR (qRT-PCR). Moreover, five of these eight differentially expressed miRNAs could hit 10 coding sequences (CDSs) via CleaveLand pipeline and psRNAtarget program. In addition, qRT-PCR revealed that four targets were negatively correlated with their corresponding miRNAs (miR319, miR394, and miRn1).

Results of sRNA high-throughput sequencing revealed that the upregulation of miRNAs may be implicated in the mechanism by which tomato respond to B. cinerea stress. Analysis of the expression profiles of B. cinerea-responsive miRNAs and their targets strongly suggested that miR319, miR394, and miRn1 may be involved in the tomato leaves’ response to B. cinerea infection.

Novel and stress-regulated microRNAs and other small RNAs from Arabidopsis.

Ramanjulu Sunkar,  Jian Zhu (2004)
MicroRNAs (miRNAs) and short interfering RNAs (siRNAs) are small noncoding RNAs that have recently emerged as important regulators of mRNA degradation, translational repression, and chromatin modification. In Arabidopsis thaliana, 43 miRNAs comprising 15 families have been reported thus far. In an attempt to identify novel and abiotic stress regulated miRNAs and siRNAs, we constructed a library of small RNAs from Arabidopsis seedlings exposed to dehydration, salinity, or cold stress or to the plant stress hormone abscisic acid. Sequencing of the library and subsequent analysis revealed 26 new miRNAs from 34 loci, forming 15 new families. Two of the new miRNAs from three loci are members of previously reported miR171 and miR319 families. Some of the miRNAs are preferentially expressed in specific tissues, and several are either upregulated or downregulated by abiotic stresses. Ten of the miRNAs are highly conserved in other plant species. Fifty-one potential targets with diverse function were predicted for the newly identified miRNAs based on sequence complementarity. In addition to miRNAs, we identified 102 other novel endogenous small RNAs in Arabidopsis. These findings suggest that a large number of miRNAs and other small regulatory RNAs are encoded by the Arabidopsis genome and that some of them may play important roles in plant responses to environmental stresses as well as in development and genome maintenance.

Endogenous siRNA and miRNA targets identified by sequencing of the Arabidopsis degradome.

Charles Addo-Quaye,  Tifani W. Eshoo,  David Bartel … (2008)
MicroRNAs (miRNAs) regulate the expression of target mRNAs in plants and animals [1]. Plant miRNA targets have been predicted on the basis of their extensive and often conserved complementarity to the miRNAs [2-4], as well as on miRNA overexpression experiments [5]; many of these target predictions have been confirmed by isolation of the products of miRNA-directed cleavage. Here, we present a transcriptome-wide experimental method, called "degradome sequencing," to directly detect cleaved miRNA targets without relying on predictions or overexpression. The 5' ends of polyadenylated, uncapped mRNAs from Arabidopsis were directly sampled, resulting in an empirical snapshot of the degradome. miRNA-mediated-cleavage products were easily discerned from an extensive background of degraded mRNAs, which collectively covered the majority of the annotated transcriptome. Many previously known Arabidopsis miRNA targets were confirmed, and several novel targets were also discovered. Quantification of cleavage fragments revealed that those derived from TAS transcripts, which are unusual in their production of abundant secondary small interfering RNAs (siRNAs), accumulated to very high levels. A subset of secondary siRNAs are also known to direct cleavage of targets in trans[6]; degradome sequencing revealed many cleaved targets of these trans-acting siRNAs (ta-siRNAs). This empirical method is broadly applicable to the discovery and quantification of cleaved targets of small RNAs without a priori predictions.