Semen was collected from 50 men occupationally exposed to carbaryl (1-naphthyl methyl carbamate) in a produciton plant for durations of 1 to 18 years and compared to semen from a control group of 34 unexposed, newly-hired workers. Employment, fertility, health, personal data, and blood samples were collected for each individual. Semen samples were analyzed for changes in sperm count, morphology, and frequency of sperm carrying double flourescent bodies (YFF). As a group, the exposed workers showed a significantly higher proportion of sperm with abnormal head shapes than did the control group ( p < 0.005). Age, smoking habits, and medical problems did not appear to affect this result. This finding appears to be limited to men working in the carbaryl production area at the time of sampling. Sperm count and YFF did not show similar differences, which may be because they are known to be statistically less sensitive to small changes. Formerly exposed workers (away from carbaryl for an average of 6.3 years) showed a marginally significant elevation in sperm abnormalities compared to controls ( p < .05, one-tailed statistical analyses) suggesting that the increase in abnormal morphology may not be reversible. However, the question of reversibility is sensitive to confounding factors and small sample sizes and, therefore, requires further study.

With these data a definitive link between carbaryl exposure and human seminal defects cannot be established. Although a distinct effect on sperm morphology was seen in the exposed group, the increases in sperm shape abnormalities were not related to exposure dose (estimated by number of years on the job or job classification during the year prior to semen collection). Inexplicably, the increases in sperm abnormalities were seen primarily in currently exposed men who had worked with carbaryl for less than approximately 6 years. These findings suggest the need for further study since other workplace-related factor(s) may be responsible for the elevated sperm abnormalities seen in this study. 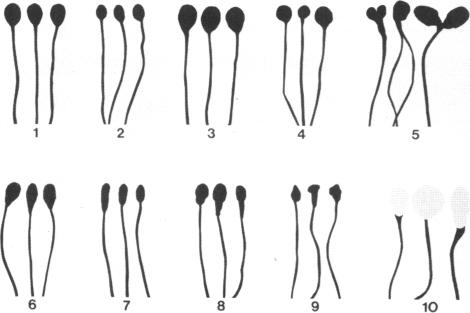