Genomic and phenotypic signatures of climate adaptation in an Anolis lizard 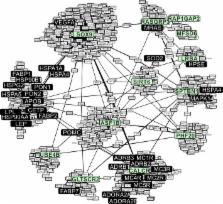 Integrated knowledge on phenotype, physiology, and genomic adaptations is required to understand the effects of climate on evolution. The functional genomic basis of organismal adaptation to changes in the abiotic environment, its phenotypic consequences, and its possible convergence across vertebrates are still understudied. In this study, we use a comparative approach to verify predicted gene functions for vertebrate thermal adaptation with observed functions underlying repeated genomic adaptations in response to elevation in the lizard Anolis cybotes. We establish a direct link between recurrently evolved phenotypes and functional genomics of altitude‐related climate adaptation in three highland and lowland populations in the Dominican Republic. We show that across vertebrates, genes contained in this interactome are expressed within the brain, the endocrine system, and during development. These results are relevant to elucidate the effect of global climate change across vertebrates and might aid in furthering insight into gene–environment relationships under disturbances to homeostasis.

Phylogenetic and Functional Assessment of Orthologs Inference Projects and Methods

Ecological opportunity and the rate of morphological evolution in the diversification of Greater Antillean anoles.

D Mahler,  Jonathan Losos,  Richard Glor … (2010)
The pace of phenotypic diversification during adaptive radiation should decrease as ecological opportunity declines. We test this prediction using phylogenetic comparative analyses of a wide range of morphological traits in Greater Antillean Anolis lizards. We find that the rate of diversification along two important axes of Anolis radiation-body size and limb dimensions-decreased as opportunity declined, with opportunity quantified either as time elapsed in the radiation or as the diversity of competing anole lineages inferred to have been present on an island at different times in the past. Most previous studies of the ecological opportunity hypothesis have focused on the rate of species diversification; our results provide a complementary perspective, indicating that the rate of phenotypic diversification declines with decreasing opportunity in an adaptive radiation. © 2010 The Author(s). Journal compilation © 2010 The Society for the Study of Evolution.

Arzucan Özgür,  Thuy Vu,  Güneş Erkan … (2008)
Motivation: Understanding the role of genetics in diseases is one of the most important aims of the biological sciences. The completion of the Human Genome Project has led to a rapid increase in the number of publications in this area. However, the coverage of curated databases that provide information manually extracted from the literature is limited. Another challenge is that determining disease-related genes requires laborious experiments. Therefore, predicting good candidate genes before experimental analysis will save time and effort. We introduce an automatic approach based on text mining and network analysis to predict gene-disease associations. We collected an initial set of known disease-related genes and built an interaction network by automatic literature mining based on dependency parsing and support vector machines. Our hypothesis is that the central genes in this disease-specific network are likely to be related to the disease. We used the degree, eigenvector, betweenness and closeness centrality metrics to rank the genes in the network. Results: The proposed approach can be used to extract known and to infer unknown gene-disease associations. We evaluated the approach for prostate cancer. Eigenvector and degree centrality achieved high accuracy. A total of 95% of the top 20 genes ranked by these methods are confirmed to be related to prostate cancer. On the other hand, betweenness and closeness centrality predicted more genes whose relation to the disease is currently unknown and are candidates for experimental study. Availability: A web-based system for browsing the disease-specific gene-interaction networks is available at: http://gin.ncibi.org Contact: radev@umich.edu

These student authors contributed equally to this work.