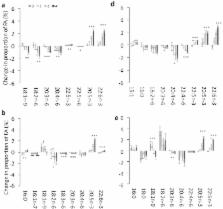 Eicosapentaenoic acid (EPA) and docosahexaenoic acid (DHA) are increased in plasma lipids and blood cell membranes in response to supplementation. Whilst arachidonic acid (AA) is correspondingly decreased, the effect on other fatty acids (FA) is less well described and there may be site-specific differences. In response to 12 months EPA + DHA supplementation in doses equivalent to 0–4 portions of oily fish/week (1 portion: 3.27 g EPA+DHA) multinomial regression analysis was used to identify important FA changes for plasma phosphatidylcholine (PC), cholesteryl ester (CE) and triglyceride (TAG) and for blood mononuclear cells (MNC), red blood cells (RBC) and platelets (PLAT). Dose-dependent increases in EPA + DHA were matched by decreases in several n-6 polyunsaturated fatty acids (PUFA) in PC, CE, RBC and PLAT, but were predominantly compensated for by oleic acid in TAG. Changes were observed for all FA classes in MNC. Consequently the n-6:n-3 PUFA ratio was reduced in a dose-dependent manner in all pools after 12 months (37%–64% of placebo in the four portions group). We conclude that the profile of the FA decreased in exchange for the increase in EPA + DHA following supplementation differs by FA pool with implications for understanding the impact of n-3 PUFA on blood lipid and blood cell biology.

Philip C. Calder,  Anthony C. Davidson,  B. Schmidt … (2010)
Much evidence shows that the marine omega-3 fatty acids eicosapentaenoic acid and docosahexaenoic acid have beneficial effects in various cardiac disorders, and their use is recommended in guidelines for management of patients after myocardial infarction. However, questions have been raised about their usefulness alongside optimum medical therapies with agents proven to reduce risk of cardiac events in high-risk patients. Additionally, there is some evidence for a possible pro-arrhythmic effect in subsets of cardiac patients. Some uncertainly exists about the optimum dose needed to obtain beneficial effects and the relative merit of dietary intake of omega-3 polyunsaturated fatty acids versus supplements. We review evidence for the effects of omega-3 polyunsaturated fatty acids on various cardiac disorders and the risk factors for cardiac disease. We also assess areas of uncertainty needing further research. Copyright 2010 Elsevier Ltd. All rights reserved.

Cecelia C. Yates,  G. Ed. Rainger,  Philip C. Calder (2014)
Omega-3 (n-3) polyunsaturated fatty acids (n-3 PUFAs) have well documented anti-inflammatory properties, and consequently therapeutic potential in chronic inflammatory diseases. Here we discuss the effects of n-3 PUFAs on various inflammatory pathways and how this leads to alterations in the function of inflammatory cells, most importantly endothelial cells and leukocytes. Strong evidence indicates n-3 PUFAs are beneficial as a dietary supplement in certain diseases such as rheumatoid arthritis; however for other conditions such as asthma, the data are less robust. A clearer understanding of the pharmacology of n-3 PUFAs will help to establish targets to modulate chronic inflammatory diseases. Copyright © 2013 Elsevier Inc. All rights reserved.

Irfhan A. B. H. Ali,  Michael Borkon,  Anthony Magalski … (2004)
Omega-3 fatty acids (FAs) appear to reduce the risk of sudden death from myocardial infarction. This reduction is believed to occur via the incorporation of eicosapentaenoic acid (EPA) and docosahexaenoic acid (DHA) into the myocardium itself, altering the dynamics of sodium and calcium channel function. The extent of incorporation has not been determined in humans. We first determined the correlation between red blood cell (RBC) and cardiac omega-3 FA levels in 20 heart transplant recipients. We then examined the effects of 6 months of omega-3 FA supplementation (1 g/d) on the FA composition of human cardiac and buccal tissue, RBCs, and plasma lipids in 25 other patients. Cardiac and RBC EPA+DHA levels were highly correlated (r=0.82, P<0.001). Supplementation increased EPA+DHA levels in cardiac tissue by 110%, in RBCs by 101%, in plasma by 139%, and in cheek cells by 73% (P<0.005 versus baseline for all; responses among tissues were not significantly different). Although any of the tissues examined could serve as a surrogate for cardiac omega-3 FA content, RBC EPA+DHA was highly correlated with cardiac EPA+DHA; the RBC omega-3 response to supplementation was similar to that of the heart; RBCs are easily collected and analyzed; and they have a less variable FA composition than plasma. Therefore, RBC EPA+DHA (also called the Omega-3 Index) may be the preferred surrogate for cardiac omega-3 FA status.