PTSD in parents of children with severe diseases: a systematic review to face Covid-19 impact 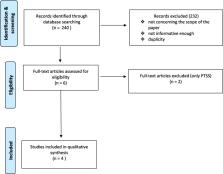 The literature agrees on the impact of post-traumatic stress symptoms in parents of seriously ill children but there is less clarity about the real extent and gender differences of this psychopathological risk. The recent Covid-19 outbreak highlighted new burdens for researchers on Post Traumatic Stress Disorder (PTSD) and clear evidence-based knowledge on this issue is timely needed .

In this review, we present a synthesis of the updated evidence on PTSD rates in parents of children with severe diseases.

We also aim to try to understand if research in this field has been refined over time with the long-term intent to better face the new challenges of Covid-19 in the paediatric field.

The PubMed database was searched.

Studies were included if they assessed PTSD in parents of children diagnosed with physical illnesses.

Analysis of the 4 studies revealed 2 studies with PTSD rates around 20% and in line with previous best-evidence. All 4 studies tried to provide more data on fathers, however, all the studies present the lack of a control group.

The limited number of studies, which also differ widely in the methodology used.

Methodological errors evidenced in all the 4 studies limit their reliability, making the understanding of the paediatric caregiver’s concern regarding PTSD still difficult. More sound research is needed.

Prevalence of mental disorders in Europe: results from the European Study of the Epidemiology of Mental Disorders (ESEMeD) project.

V. Kovess,  F Mazzi,  S-I Joo … (2003)
To describe the 12-month and lifetime prevalence rates of mood, anxiety and alcohol disorders in six European countries. A representative random sample of non-institutionalized inhabitants from Belgium, France, Germany, Italy, the Netherlands and Spain aged 18 or older (n = 21425) were interviewed between January 2001 and August 2003. DSM-IV disorders were assessed by lay interviewers using a revised version of the Composite International Diagnostic Interview (WMH-CIDI). Fourteen per cent reported a lifetime history of any mood disorder, 13.6% any anxiety disorder and 5.2% a lifetime history of any alcohol disorder. More than 6% reported any anxiety disorder, 4.2% any mood disorder, and 1.0% any alcohol disorder in the last year. Major depression and specific phobia were the most common single mental disorders. Women were twice as likely to suffer 12-month mood and anxiety disorders as men, while men were more likely to suffer alcohol abuse disorders. ESEMeD is the first study to highlight the magnitude of mental disorders in the six European countries studied. Mental disorders were frequent, more common in female, unemployed, disabled persons, or persons who were never married or previously married. Younger persons were also more likely to have mental disorders, indicating an early age of onset for mood, anxiety and alcohol disorders.