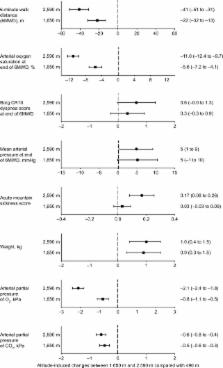 To evaluate the effects of altitude travel on exercise performance and symptoms in lowlanders with COPD.

During sojourns at 1,650 m and 2,590 m, lowlanders with moderate to severe COPD experienced a mild reduction in exercise performance and nearly one quarter required oxygen therapy or descent to lower altitude because of adverse health effects. The findings may help to counsel COPD patients planning altitude travel.

L Kaijser,  E Borg (2006)
In the present article, three scales developed by Borg are compared on bicycle ergometer work. In the first study, comparing the Borg Ratings of Perceived Exertion (RPE) and Category scales with Ratio properties (CR10) scales, 40 healthy subjects (12 men and eight women for each scale) with a mean age of about 30 years (SD approximately 6) participated. A work-test protocol with step-wise increase of work loads every minute was used (20 W increase for men and 15 W for women). Ratings and heart rates (HRs) were recorded every minute and blood lactates every third minute. Data obtained with the RPE scale were described with linear regressions, with individual correlations of about 0.98. Data obtained with the CR10 scale could also be described by linear regressions, but when described by power functions gave exponents of about 1.2 (SD approximately 0.4) (with one additional constant included in the power function). This was significantly lower than the exponent of between 1.5 and 1.9 that has previously been observed. Mean individual correlations were 0.98. Blood lactate concentration grew with monotonously increasing functions that could be described by power functions with a mean exponent of about 2.6 (SD approximately 0.6) (with two additional constants included in the power functions). In the second study, where also the more recently developed Borg CR100 scale (centiMax) was included, 24 healthy subjects (12 men and 12 women) with a mean age of about 29 years (SD approximately 3) participated in a work test with a step-wise increase of work loads (25 W) every third minute. Ratings and HRs were recorded. RPE values were described by linear regressions with individual correlations of about 0.97. Data from the two CR scales were described by power functions with mean exponents of about 1.4 (SD approximately 0.5) (with a-values in the power functions). Mean individual correlations were about 0.98. In both studies, a tendency for a deviation from linearity between RPE values and HRs was observed. The obtained deviations from what has previously been obtained for work of longer duration (4-6 min) points to a need for standardization of work-test protocols and to the advantage of using CR scales.

Interpretation of treatment changes in 6-minute walk distance in patients with COPD.

U Held,  M Jeffery Mador,  M Puhan … (2008)
There is uncertainty about the interpretation of changes in the 6-min walk distance (6MWD) in chronic obstructive pulmonary disease (COPD) patients and whether the minimal important difference (MID) for this useful outcome measure exists. Data were used from nine trials enrolling a wide spectrum of COPD patients with 6MWD at baseline and follow-up and used to determine threshold values for important changes in 6MWD using three distribution-based methods. Anchor-based methods to determine a MID were also evaluated. Data were included of 460 COPD patients with a mean+/-sd forced expiratory volume in one second (FEV(1)) of 39.2+/-14.1% predicted and 6MWD of 361+/-112 m at baseline. Threshold values for important effects in 6MWD were between 29 and 42 m, respectively, using the empirical rule effect size and the standardised response mean. The threshold value was 35 m (95% confidence interval 30-42 m) based on the standard error of measurement. Correlations of 6MWD with patient-reported anchors were too low to provide meaningful MID estimates. 6-min walk distance should change by approximately 35 m for patients with moderate to severe chronic obstructive pulmonary disease in order to represent an important effect. This corresponds to a 10% change of baseline 6-min walk distance. The low correlations of 6-min walk distance with patient-reported anchors question whether a minimal important difference exists for the 6-min walk distance.

Andrew Luks,  Scott McIntosh,  Colin K Grissom … (2014)
To provide guidance to clinicians about best practices, the Wilderness Medical Society convened an expert panel to develop evidence-based guidelines for prevention and treatment of acute mountain sickness, high altitude cerebral edema, and high altitude pulmonary edema. These guidelines present the main prophylactic and therapeutic modalities for each disorder and provide recommendations about their role in disease management. Recommendations are graded based on the quality of supporting evidence and balance between the benefits and risks/burdens according to criteria put forth by the American College of Chest Physicians. The guidelines also provide suggested approaches to prevention and management of each disorder that incorporate these recommendations. This is an updated version of the original WMS Consensus Guidelines for the Prevention and Treatment of Acute Altitude Illness published in Wilderness & Environmental Medicine 2010;21(2):146-155.