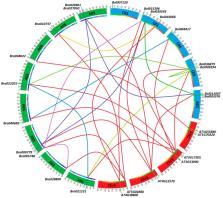 The HECT-domain protein family is one of the most important classes of E3 ligases. While the roles of this family in human diseases have been intensively studied, the information for plant HECTs is limited. In the present study, we performed the identification of HECT genes in Brassica rapa and Brassica oleracea, followed by analysis of phylogeny, gene structure, additional domains, putative cis-regulatory elements, chromosomal location, synteny, and expression. Ten and 13 HECT genes were respectively identified in B. rapa and B. oleracea and then resolved into seven groups along with their Arabidopsis orthologs by phylogenetic analysis. This classification is well supported by analyses of gene structure, motif composition within the HECT domain and additional protein domains. Ka/Ks ratio analysis showed that these HECT genes primarily underwent purifying selection with varied selection pressures resulting in different rates of evolution. RNA-Seq data analysis showed that the overwhelming majority of them were constitutively expressed in all tested tissues. qRT-PCR based expression analysis of the 10 B. rapa HECT genes under salt and drought stress conditions showed that all of them were responsive to the two stress treatments, which was consistent with their promoter sequence analysis revealing the presence of an important number of phytohormone-responsive and stress-related cis-regulatory elements. Our study provides useful information and lays the foundation for further functional determination of each HECT gene across the Brassica species.

A codon-based model of nucleotide substitution for protein-coding DNA sequences.

(1994)
A codon-based model for the evolution of protein-coding DNA sequences is presented for use in phylogenetic estimation. A Markov process is used to describe substitutions between codons. Transition/transversion rate bias and codon usage bias are allowed in the model, and selective restraints at the protein level are accommodated using physicochemical distances between the amino acids coded for by the codons. Analyses of two data sets suggest that the new codon-based model can provide a better fit to data than can nucleotide-based models and can produce more reliable estimates of certain biologically important measures such as the transition/transversion rate ratio and the synonymous/nonsynonymous substitution rate ratio.

Physiological functions of the HECT family of ubiquitin ligases.

Sharad Kumar,  Daniela Rotin (2009)
The ubiquitylation of proteins is carried out by E1, E2 and E3 (ubiquitin ligase) enzymes, and targets them for degradation or for other cellular fates. The HECT enzymes, including Nedd4 family members, are a major group of E3 enzymes that dictate the specificity of ubiquitylation. In addition to ubiquitylating proteins for degradation by the 26S proteasome, HECT E3 enzymes regulate the trafficking of many receptors, channels, transporters and viral proteins. The physiological functions of the yeast HECT E3 ligase Rsp5 are the best known, but the functions of HECT E3 enyzmes in metazoans are now becoming clearer from in vivo studies.

Victor Solovyev,  Peter Kosarev,  Igor Seledsov … (2006)
Background The ENCODE gene prediction workshop (EGASP) has been organized to evaluate how well state-of-the-art automatic gene finding methods are able to reproduce the manual and experimental gene annotation of the human genome. We have used Softberry gene finding software to predict genes, pseudogenes and promoters in 44 selected ENCODE sequences representing approximately 1% (30 Mb) of the human genome. Predictions of gene finding programs were evaluated in terms of their ability to reproduce the ENCODE-HAVANA annotation. Results The Fgenesh++ gene prediction pipeline can identify 91% of coding nucleotides with a specificity of 90%. Our automatic pseudogene finder (PSF program) found 90% of the manually annotated pseudogenes and some new ones. The Fprom promoter prediction program identifies 80% of TATA promoters sequences with one false positive prediction per 2,000 base-pairs (bp) and 50% of TATA-less promoters with one false positive prediction per 650 bp. It can be used to identify transcription start sites upstream of annotated coding parts of genes found by gene prediction software. Conclusion We review our software and underlying methods for identifying these three important structural and functional genome components and discuss the accuracy of predictions, recent advances and open problems in annotating genomic sequences. We have demonstrated that our methods can be effectively used for initial automatic annotation of the eukaryotic genome.