What Does It Mean to Be a Young African Woman on a University Campus in Times of Sexual Violence? A New Moment, a New Conversation 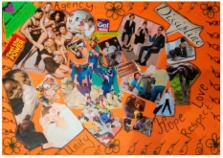 Sexual violence in the higher education is an epidemic of global proportions. Scholars conclude that the individual and collective silence that surrounds such violence enables its perpetration and that violence will only be eradicated when we break this silence. In this paper, we used two participatory visual methods (PVM), collage and storytelling, to explore what sexual violence at university looks like and what it means to woman students. Two groups of student teachers in two South African universities were engaged in collage and storytelling workshops in late 2017 and early 2018, respectively. We thematically analyzed the issues that emerged from the data, drawing on transformative learning theory to explore how our approach might help women students to break the silence around sexual violence and stimulate critical dialogue to address it. Our analysis suggests that these visual tools enabled deep reflections on the meaning and impact of sexual violence, particularly for women. In addition, the participatory process supported introspection about their experiences of sexual violence and their responses to it as bystanders in and around campus. More importantly, they discussed how they, as young women, might break the silence and sustain new conversations about gender and gender equality in institutions and beyond.

The epidemiology of rape and sexual coercion in South Africa: an overview.

Rachel Jewkes,  N Abrahams (2002)
During 1999 the issue of rape in South Africa was debated at the highest levels. The epidemiology of rape has become an issue of considerable political importance and sensitivity, with President Mbeki demanding an answer to the question: how much rape is there in South Africa? The purpose of this paper is both to summarise and synthesise the findings of research to provide an overview of the epidemiology of rape of women in South Africa and to show how difficult it is to answer the President's question. The review begins by considering why rape is so difficult to research. Data available shows that rape reported to the police (240 incidents of rape and attempted rape per 100,000 women each year) represents the tip of an ice berg of sexual coercion. Representative community-based surveys have found, for example, that in the 17-48 age group there are 2070 such incidents per 100,000 women per year. Non-consensual sex in marriage and dating relationships is believed to be very common but is usually not well reported in surveys. Forced sexual initiation is reported by almost a third of adolescent girls. In addition coerced consensual sex is a common problem in schools, workplaces and amongst peers. Knowledge of causal and contributory factors influencing the high levels of rape are also discussed. We conclude that the rape statistic for the country is currently elusive but levels of non-consensual and coerced sex are clearly very high. International comparison needs to be approached with caution because most developing countries lack the infrastructure for accurate crime reporting and do not have such a substantial body of survey data.

Sexuality and the limits of agency among South African teenage women: theorising femininities and their connections to HIV risk practices.

Robert Morrell,  R Jewkes (2012)
In South Africa, both HIV and gender-based violence are highly prevalent. Gender inequalities give men considerable relational power over young women, particularly in circumstances of poverty and where sex is materially rewarded. Young women are often described as victims of men, but this inadequately explains women's observed sexual agency. This paper takes a different approach. We use qualitative interviews and ethnographic observation among 16 young women from the rural Eastern Cape to explore ways young women construct their femininities and exercise agency. The data were collected as part of an evaluation of Stepping Stones, which is a participatory behavioural intervention for HIV prevention that seeks to be gender transformative. Agency was most notable in particular stages of the dating 'game', especially relationship initiation. Constructions of desirable men differed but generally reflected a wish to avoid violence, and a search for mutual respect, sexual pleasure, romance, modernity, status and money. Agency was constrained once relationships were consented to, as men expected to control their partners, using violent and non-violent methods. Women knew this and many accepted this treatment, although often expressing ambivalence. Many of the women expressed highly acquiescent femininities, with power surrendered to men, as a 'choice' that made their lives in cultural terms more meaningful. In marked contrast to this was a 'modern' femininity, centred around a desire to be 'free'. A visible third position, notably emerging after the Stepping Stones intervention, rested not on a feminist challenge to patriarchy, but on an accommodation with men's power whilst seeking to negotiate greater respect and non-violence within relations with men. These multiple and dynamic femininities open up possibilities for change. They demonstrate the need to engage with women, both as victims of patriarchy and active supporters of the gender order. The multiplicity of women's hopes and desires and circumstances of emotional and relational fulfillment provides potential for interventions with women that acknowledge existing gender inequalities, validate women's agency, reduce violence and prevent HIV. Copyright © 2011 Elsevier Ltd. All rights reserved.