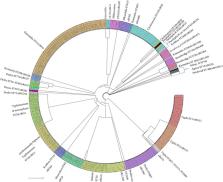 Salmonella enterica is the second most reported bacterial cause of food-borne infections in Europe. Therefore molecular surveillance activities based on pathogen subtyping are an important measure of controlling Salmonellosis by public health agencies. In Germany, at the federal level, this work is carried out by the National Reference Center for Salmonella and other Bacterial Enteric Pathogens (NRC). With rise of next generation sequencing techniques, the NRC has introduced whole-genome-based typing methods for S. enterica in 2016. In this study we report on the feasibility of genome-based in silico serotyping in the German setting using raw sequence reads. We found that SeqSero and seven gene MLST showed 98% and 95% concordance, respectively, with classical serotyping for the here evaluated serotypes, including the most common German serotypes S. Enteritidis and S. Typhimurium as well as less frequently found serotypes. The level of concordance increased to >99% when the results of both in silico methods were combined. However, both tools exhibited misidentification of monophasic variants, in particular monophasic S. Typhimurium and therefore need to be fine-tuned for reliable detection of this epidemiologically important variant. We conclude that with adjustments Salmonella genome-based serotyping might become the new gold standard.

E Feil, B. C. Li, D M Aanensen … (2004)
The introduction of multilocus sequence typing (MLST) for the precise characterization of isolates of bacterial pathogens has had a marked impact on both routine epidemiological surveillance and microbial population biology. In both fields, a key prerequisite for exploiting this resource is the ability to discern the relatedness and patterns of evolutionary descent among isolates with similar genotypes. Traditional clustering techniques, such as dendrograms, provide a very poor representation of recent evolutionary events, as they attempt to reconstruct relationships in the absence of a realistic model of the way in which bacterial clones emerge and diversify to form clonal complexes. An increasingly popular approach, called BURST, has been used as an alternative, but present implementations are unable to cope with very large data sets and offer crude graphical outputs. Here we present a new implementation of this algorithm, eBURST, which divides an MLST data set of any size into groups of related isolates and clonal complexes, predicts the founding (ancestral) genotype of each clonal complex, and computes the bootstrap support for the assignment. The most parsimonious patterns of descent of all isolates in each clonal complex from the predicted founder(s) are then displayed. The advantages of eBURST for exploring patterns of evolutionary descent are demonstrated with a number of examples, including the simple Spain(23F)-1 clonal complex of Streptococcus pneumoniae, "population snapshots" of the entire S. pneumoniae and Staphylococcus aureus MLST databases, and the more complicated clonal complexes observed for Campylobacter jejuni and Neisseria meningitidis.

Shaokang Zhang, Yanlong Yin, Marcus Jones … (2015)
Serotyping forms the basis of national and international surveillance networks for Salmonella, one of the most prevalent foodborne pathogens worldwide (1-3). Public health microbiology is currently being transformed by whole-genome sequencing (WGS), which opens the door to serotype determination using WGS data. SeqSero (www.denglab.info/SeqSero) is a novel Web-based tool for determining Salmonella serotypes using high-throughput genome sequencing data. SeqSero is based on curated databases of Salmonella serotype determinants (rfb gene cluster, fliC and fljB alleles) and is predicted to determine serotype rapidly and accurately for nearly the full spectrum of Salmonella serotypes (more than 2,300 serotypes), from both raw sequencing reads and genome assemblies. The performance of SeqSero was evaluated by testing (i) raw reads from genomes of 308 Salmonella isolates of known serotype; (ii) raw reads from genomes of 3,306 Salmonella isolates sequenced and made publicly available by GenomeTrakr, a U.S. national monitoring network operated by the Food and Drug Administration; and (iii) 354 other publicly available draft or complete Salmonella genomes. We also demonstrated Salmonella serotype determination from raw sequencing reads of fecal metagenomes from mice orally infected with this pathogen. SeqSero can help to maintain the well-established utility of Salmonella serotyping when integrated into a platform of WGS-based pathogen subtyping and characterization.