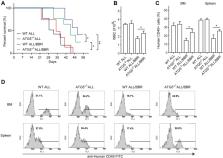 Berberine has been reported to inhibit cancer cell growth by apoptosis induction and exhibits a protective role against cancer progression. The current study aims to investigate the effects of berberine on acute lymphoblastic leukemia (ALL) and the mechanism beyond apoptosis.

In conclusion, our study reveals that berberine could induce ALL cell autophagic death by inactivating AKT/mTORC1 signaling that could be used to develop small molecule drug for ALL treatment.

Contributions of the Raf/MEK/ERK, PI3K/PTEN/Akt/mTOR and Jak/STAT pathways to leukemia.

F Stivala,  Linda S. Steelman,  A Bonati … (2008)
Mutations and chromosomal translocations occur in leukemic cells that result in elevated expression or constitutive activation of various growth factor receptors and downstream kinases. The Raf/MEK/ERK, PI3K/PTEN/Akt/mTOR and Jak/STAT pathways are often activated by mutations in upstream genes. The Raf/MEK/ERK and PI3K/PTEN/Akt/mTOR pathways are regulated by upstream Ras that is frequently mutated in human cancer. Recently, it has been observed that the FLT-3 and Jak kinases and the phosphatase and tensin homologue deleted on chromosome 10 (PTEN) phosphatase are also frequently mutated or their expression is altered in certain hematopoietic neoplasms. Many of the events elicited by the Raf/MEK/ERK, PI3K/PTEN/Akt/mTOR and Jak/STAT pathways have direct effects on survival pathways. Aberrant regulation of the survival pathways can contribute to uncontrolled cell growth and lead to leukemia. In this review, we describe the Raf/MEK/ERK, PI3K/PTEN/Akt/mTOR and Jak/STAT signaling cascades and summarize recent data regarding the regulation and mutation status of these pathways and their involvement in leukemia.

This study was supported by a grant from the National Natural Science Foundation of China (No. 81600133 to J.L.).