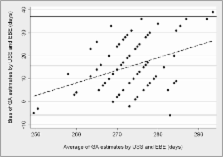 Accurate assessment of gestational age at birth is critical to the identification of neonates at high risk. In resource‐poor settings, postnatal techniques are commonly used but may be difficult to apply and have not been well validated against ultrasound in community studies. The aim of this study was to evaluate postnatal assessment of gestational age in rural Africa using the external criteria of the Ballard examination against 1st/early 2nd‐trimester ultrasound and date of last menstrual period.

In a sample of women from Kiang West, The Gambia ( n = 80), the precision of gestational age estimates using the external Ballard examination was compared with those derived from 1st and early 2nd‐trimester ultrasound examination and date of last menstrual period.

The incidence of preterm delivery was low at 2.5%. The external Ballard examination tended to underestimate gestational age by a mean (SD) of 15.6 (10.9) days compared with that derived from ultrasound and to underestimate by 15.4 (23.1) days compared with that derived from date of last menstrual period. The differences between the methods varied with gestation.

In this rural, community‐born population of infants, postnatal assessment of gestational age by external Ballard examination performed poorly compared with ultrasound and last menstrual period. No reliable gestational age could be derived from its estimate and it failed to detect a significant proportion of high‐risk infants. The development of an accurate but simple method of postnatally assessing gestational age specifically for use by health workers in rural Africa is required.

G Cunningham,  John W. Hawes,  Adrian Williams … (1982)
To produce more appropriate information for evaluating fetal growth and viability, vital records data were used to compute percentile curves and perinatal, neonatal, and fetal mortality rates at specific birth weights and gestational ages. Percentile values were in good agreement with previous studies, and the large number of births (2,288,806) allowed for a more precise determination of fetal viability at various weight-age combinations than has been previously available. Mortality rates were found to be much more sensitive to birth weight than to gestational age, especially for small-for-gestational age fetuses. Optimal weight-age combinations were found to be up to 500 g and 2 weeks greater than the average combination. The results consistently emphasize the importance of rapid and sustained fetal growth at all gestational ages.

A simplified score for assessment of fetal maturation of newly born infants.

Jeanne Ballard,  Kathy Novak,  Marshall Driver (1979)
A simplified scoring system for clinically determining fetal maturation of newly born infants has been developed and provides accurate assessment of gestational age in either well or sick babies. Certain conditions render individual criteria within the score less reliable but do not significantly lessen the reliability of the total assessment. The optimal age for maturational assessment is between 30 and 42 hours of age.

MORE OpenChoice articles are open access and distributed under the terms of the Creative Commons Attribution License 3.0