The breadth of primary care: a systematic literature review of its core dimensions 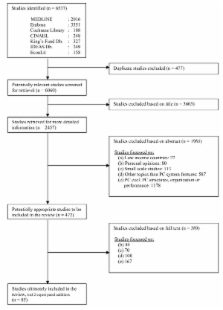 Even though there is general agreement that primary care is the linchpin of effective health care delivery, to date no efforts have been made to systematically review the scientific evidence supporting this supposition. The aim of this study was to examine the breadth of primary care by identifying its core dimensions and to assess the evidence for their interrelations and their relevance to outcomes at (primary) health system level.

A primary care system can be defined and approached as a multidimensional system contributing to overall health system performance and health.

Contribution of primary care to health systems and health.

What fosters or prevents interprofessional teamworking in primary and community care? A literature review.

Andreas Xyrichis,  Karen Lowton (2007)
The increase in prevalence of long-term conditions in Western societies, with the subsequent need for non-acute quality patient healthcare, has brought the issue of collaboration between health professionals to the fore. Within primary care, it has been suggested that multidisciplinary teamworking is essential to develop an integrated approach to promoting and maintaining the health of the population whilst improving service effectiveness. Although it is becoming widely accepted that no single discipline can provide complete care for patients with a long-term condition, in practice, interprofessional working is not always achieved. This review aimed to explore the factors that inhibit or facilitate interprofessional teamworking in primary and community care settings, in order to inform development of multidisciplinary working at the turn of the century. A comprehensive search of the literature was undertaken using a variety of approaches to identify appropriate literature for inclusion in the study. The selected articles used both qualitative and quantitative research methods. Following a thematic analysis of the literature, two main themes emerged that had an impact on interprofessional teamworking: team structure and team processes. Within these two themes, six categories were identified: team premises; team size and composition; organisational support; team meetings; clear goals and objectives; and audit. The complex nature of interprofessional teamworking in primary care meant that despite teamwork being an efficient and productive way of achieving goals and results, several barriers exist that hinder its potential from becoming fully exploited; implications and recommendations for practice are discussed. These findings can inform development of current best practice, although further research needs to be conducted into multidisciplinary teamworking at both the team and organisation level, to ensure that enhancement and maintenance of teamwork leads to an improved quality of healthcare provision.

The contribution of primary care systems to health outcomes within Organization for Economic Cooperation and Development (OECD) countries, 1970-1998.

Leiyu Shi,  Barbara Starfield,  James Macinko (2003)
To assess the contribution of primary care systems to a variety of health outcomes in 18 wealthy Organization for Economic Cooperation and Development (OECD) countries over three decades. Data were primarily derived from OECD Health Data 2001 and from published literature. The unit of analysis is each of 18 wealthy OECD countries from 1970 to 1998 (total n = 504). Pooled, cross-sectional, time-series analysis of secondary data using fixed effects regression. Secondary analysis of public-use datasets. Primary care system characteristics were assessed using a common set of indicators derived from secondary datasets, published literature, technical documents, and consultation with in-country experts. The strength of a country's primary care system was negatively associated with (a) all-cause mortality, (b) all-cause premature mortality, and (c) cause-specific premature mortality from asthma and bronchitis, emphysema and pneumonia, cardiovascular disease, and heart disease (p<0.05 in fixed effects, multivariate regression analyses). This relationship was significant, albeit reduced in magnitude, even while controlling for macro-level (GDP per capita, total physicians per one thousand population, percent of elderly) and micro-level (average number of ambulatory care visits, per capita income, alcohol and tobacco consumption) determinants of population health. (1) Strong primary care system and practice characteristics such as geographic regulation, longitudinality, coordination, and community orientation were associated with improved population health. (2) Despite health reform efforts, few OECD countries have improved essential features of their primary care systems as assessed by the scale used here. (3) The proposed scale can also be used to monitor health reform efforts intended to improve primary care.