Assessing the suitability of summary data for two-sample Mendelian randomization analyses using MR-Egger regression: the role of the I 2 statistic 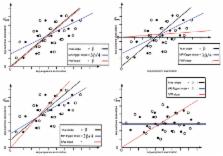 MR-Egger regression has recently been proposed as a method for Mendelian randomization (MR) analyses incorporating summary data estimates of causal effect from multiple individual variants, which is robust to invalid instruments. It can be used to test for directional pleiotropy and provides an estimate of the causal effect adjusted for its presence. MR-Egger regression provides a useful additional sensitivity analysis to the standard inverse variance weighted (IVW) approach that assumes all variants are valid instruments. Both methods use weights that consider the single nucleotide polymorphism (SNP)-exposure associations to be known, rather than estimated. We call this the `NO Measurement Error’ (NOME) assumption. Causal effect estimates from the IVW approach exhibit weak instrument bias whenever the genetic variants utilized violate the NOME assumption, which can be reliably measured using the F-statistic. The effect of NOME violation on MR-Egger regression has yet to be studied.

An adaptation of the I 2 statistic from the field of meta-analysis is proposed to quantify the strength of NOME violation for MR-Egger. It lies between 0 and 1, and indicates the expected relative bias (or dilution) of the MR-Egger causal estimate in the two-sample MR context. We call it The method of simulation extrapolation is also explored to counteract the dilution. Their joint utility is evaluated using simulated data and applied to a real MR example.

In simulated two-sample MR analyses we show that, when a causal effect exists, the MR-Egger estimate of causal effect is biased towards the null when NOME is violated, and the stronger the violation (as indicated by lower values of ), the stronger the dilution. When additionally all genetic variants are valid instruments, the type I error rate of the MR-Egger test for pleiotropy is inflated and the causal effect underestimated. Simulation extrapolation is shown to substantially mitigate these adverse effects. We demonstrate our proposed approach for a two-sample summary data MR analysis to estimate the causal effect of low-density lipoprotein on heart disease risk. A high value of close to 1 indicates that dilution does not materially affect the standard MR-Egger analyses for these data.

Care must be taken to assess the NOME assumption via the statistic before implementing standard MR-Egger regression in the two-sample summary data context. If is sufficiently low (less than 90%), inferences from the method should be interpreted with caution and adjustment methods considered.

George Smith, Shah Ebrahim (2003)
Associations between modifiable exposures and disease seen in observational epidemiology are sometimes confounded and thus misleading, despite our best efforts to improve the design and analysis of studies. Mendelian randomization-the random assortment of genes from parents to offspring that occurs during gamete formation and conception-provides one method for assessing the causal nature of some environmental exposures. The association between a disease and a polymorphism that mimics the biological link between a proposed exposure and disease is not generally susceptible to the reverse causation or confounding that may distort interpretations of conventional observational studies. Several examples where the phenotypic effects of polymorphisms are well documented provide encouraging evidence of the explanatory power of Mendelian randomization and are described. The limitations of the approach include confounding by polymorphisms in linkage disequilibrium with the polymorphism under study, that polymorphisms may have several phenotypic effects associated with disease, the lack of suitable polymorphisms for studying modifiable exposures of interest, and canalization-the buffering of the effects of genetic variation during development. Nevertheless, Mendelian randomization provides new opportunities to test causality and demonstrates how investment in the human genome project may contribute to understanding and preventing the adverse effects on human health of modifiable exposures.