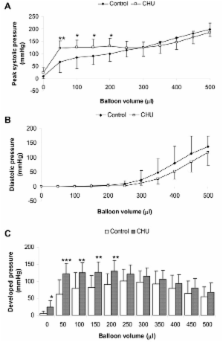 Chronic hypoxia in utero (CHU) is one of the most common insults to fetal development and may be associated with poor cardiac recovery from ischaemia-reperfusion injury, yet the effects on normal cardiac mechanical performance are poorly understood.

Developmental changes in contractility and sarcomeric proteins from the early embryonic to the adult stage in the mouse heart.

Doris Metzler,  Bernd Fleischmann,  Gabriele Pfitzer … (2003)
Developmental changes in force-generating capacity and Ca2+ sensitivity of contraction in murine hearts were correlated with changes in myosin heavy chain (MHC) and troponin (Tn) isoform expression, using Triton-skinned fibres. The maximum Ca2+-activated isometric force normalized to the cross-sectional area (FCSA) increased mainly during embryogenesis and continued to increase at a slower rate until adulthood. During prenatal development, FCSA increased about 5-fold from embryonic day (E)10.5 to E19.5, while the amount of MHC normalized to the amount of total protein remained constant (from E13.5 to E19.5). This suggests that the development of structural organization of the myofilaments during the embryonic and the fetal period may play an important role for the improvement of force generation. There was an overall decrease of 0.5 pCa units in the Ca2+ sensitivity of force generation from E13.5 to the adult, of which the main decrease (0.3 pCa units) occurred within a short time interval, between E19.5 and 7 days after birth (7 days pn). Densitometric analysis of SDS-PAGE and Western blots revealed that the major switches between troponin T (TnT) isoforms occur before E16.5, whereas the transition points of slow skeletal troponin I (ssTnI) to cardiac TnI (cTnI) and of beta-MHC to alpha-MHC both occur around birth, in temporal correlation with the main decrease in Ca2+ sensitivity. To test whether the changes in Ca2+ sensitivity are solely based on Tn, the native Tn complex was replaced in fibres from E19.5 and adult hearts with fast skeletal Tn complex (fsTn) purified from rabbit skeletal muscle. The difference in pre-replacement values of pCa50 (-log([Ca2+] M-1)) required for half-maximum force development) between E19.5 (6.05 +/- 0.01) and adult fibres (5.64 +/- 0.04) was fully abolished after replacement with the exogenous skeletal Tn complex (pCa50 = 6.12 +/- 0.05 for both stages). This suggests that the major developmental changes in Ca2+ sensitivity of skinned murine myocardium originate primarily from the switch of ssTnI to cTnI.

Soochan Bae,  Carlos A. Casiano,  Daphne Y. Xiao … (2003)
Chronic hypoxia during pregnancy is one of the most common insults to fetal development. We tested the hypothesis that maternal hypoxia induced apoptosis in the hearts of near-term fetal rats. Pregnant rats were divided into two groups, normoxic control and continuous hypoxic exposure (10.5% O2) from day 15 to 21 of gestation. Hearts were isolated from fetal rats of 21-day gestational age. Maternal hypoxia increased hypoxia-inducible factor-1alpha protein in fetal hearts. Chronic hypoxia significantly increased the percentage and size of binucleated myocytes and increased apoptotic cells from 1.4 +/- 0.14% to 2.7 +/- 0.3% in the fetal heart. In addition, the active cleaved form of caspase 3 was significantly increased in the hypoxic heart, which was associated with an increase in caspase 3 activity. There was a significant increase in Fas protein levels in the hypoxic heart. Chronic hypoxia did not change Bax protein levels but significantly decreased Bcl-2 proteins. In addition, chronic hypoxia significantly suppressed expression of heat shock protein 70. However, chronic hypoxia significantly increased expression of the anti-apoptotic protein 14-3-3, among other 14-3-3 isoforms. Chronic hypoxia differentially regulated beta-adrenoreceptor (beta-AR) subtypes with an increase in beta1-AR levels but no changes in beta2-AR. The results demonstrate that maternal hypoxia increases apoptosis in fetal rat heart, which may be mediated by an increase in Fas and a decrease in Bcl-2 proteins. Chronic hypoxia-mediated increase in beta1-AR and decrease in heat shock proteins may also play an important role in apoptosis in the fetal heart.