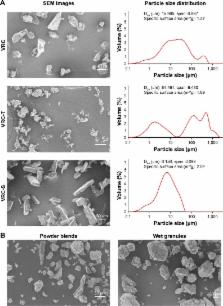 To develop an immediate release-type tablet containing varenicline salicylate (VRC-S), a smoking cessation agent, formulation and stability studies were performed. The in vitro dissolution and in vivo pharmacokinetic (PK) behavior of the tablets were compared with those of the commercial product (Champix) as a reference.

The characteristics of the powder were investigated by particle morphology, size distribution, solubility, hygroscopicity, differential scanning calorimetry, and powder X-ray diffraction. Based on the drug–excipient compatibility test, different VRC-S tablets were prepared with the selected excipients through direct compression or wet granulation method and subjected to a dissolution test. The stability of the most promising VRC-S tablet (F4) was evaluated under accelerated conditions (40°C and 75% relative humidity). Further, the dissolution and human pharmacokinetic profiles of the F4 tablet and Champix were compared.

VRC-S showed a positively skewed unimodal size distribution with a specific surface area of 2.02 m 2/g, single endothermic peak of 225.2°C in differential scanning calorimetry, crystalline internal structure in powder X-ray diffraction, aqueous solubility of 244.7 mg/mL, and hygroscopicity of 0.256 mg/g. The wet granulation method was preferred for tablet preparation and employed the following excipients: microcrystalline cellulose and anhydrous dibasic calcium phosphate as diluents, croscarmellose sodium as a disintegrant, and colloidal silicon dioxide and magnesium stearate as lubricants. The F4 tablet was stable for 6 months under accelerated conditions. The dissolution of VRC was pH independent, revealing f 2 values of 76.49 and 68.38 at pH 1.2 and pH 6.8, respectively. After the oral administration of F4 tablet and Champix to healthy human volunteers, pharmacokinetic parameters, including time to reach the maximum plasma concentration (T max), maximum plasma concentration (C max), and area under the curve from 0 to infinity (AUC inf), were compared. The values of 90% CI were 0.972–1.035 for C max and 0.982–1.075 for AUC inf, which was indicative of the bioequivalence of both products.

VRC-S–containing F4 tablet might be a good candidate for smoking cessation treatment.

S Julious (2004)
This article gives an overview of sample size calculations for parallel group and cross-over studies with Normal data. Sample size derivation is given for trials where the objective is to demonstrate: superiority, equivalence, non-inferiority, bioequivalence and estimation to a given precision, for different types I and II errors. It is demonstrated how the different trial objectives influence the null and alternative hypotheses of the trials and how these hypotheses influence the calculations. Sample size tables for the different types of trials and worked examples are given. Copyright 2004 John Wiley & Sons, Ltd.

Robert Schulz,  R Mather,  R Mansbach … (2007)
The preclinical pharmacology of the alpha4beta2 nicotinic acetylcholine receptor (nAChR) partial agonist varenicline, a novel smoking cessation agent is described. Varenicline binds with subnanomolar affinity only to alpha4beta2 nAChRs and in vitro functional patch clamp studies in HEK cells expressing nAChRs show that varenicline is a partial agonist with 45% of nicotine's maximal efficacy at alpha4beta2 nAChRs. In neurochemical models varenicline has significantly lower (40-60%) efficacy than nicotine in stimulating [(3)H]-dopamine release from rat brain slices in vitro and in increasing dopamine release from rat nucleus accumbens in vivo, while it is more potent than nicotine. In addition, when combined with nicotine, varenicline effectively attenuates the nicotine-induced dopamine release to the level of the effect of varenicline alone, consistent with partial agonism. Finally, varenicline reduces nicotine self-administration in rats and supports lower self-administration break points than nicotine. These data suggest that varenicline can reproduce to some extent the subjective effects of smoking by partially activating alpha4beta2 nAChRs, while preventing full activation of these receptors by nicotine. Based on these findings, varenicline was advanced into clinical development and recently shown to be an effective and safe aid for smoking cessation treatment.

The accumulated evidence on lung cancer and environmental tobacco smoke.