Latitudinal Adaptation and Genetic Insights Into the Origins of Cannabis sativa L. 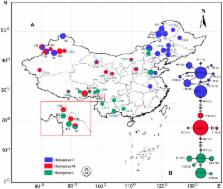 Cannabis is one of the most important industrial crops distributed worldwide. However, the phylogeographic structure and domestication knowledge of this crop remains poorly understood. In this study, sequence variations of five chloroplast DNA (cpDNA) regions were investigated to address these questions. For the 645 individuals from 52 Cannabis accessions sampled (25 wild populations and 27 domesticated populations or cultivars), three haplogroups (Haplogroup H, M, L) were identified and these lineages exhibited distinct high-middle-low latitudinal gradients distribution pattern. This pattern can most likely be explained as a consequence of climatic heterogeneity and geographical isolation. Therefore, we examined the correlations between genetic distances and geographical distances, and tested whether the climatic factors are correlated with the cpDNA haplogroup frequencies of populations. The “isolation-by-distance” models were detected for the phylogeographic structure, and the day-length was found to be the most important factor (among 20 BioClim factors) that influenced the population structures. Considering the distinctive phylogeographic structures and no reproductive isolation among members of these lineages, we recommend that Cannabis be recognized as a monotypic genus typified by Cannabis sativa L., containing three subspecies: subsp. sativa, subsp. Indica, and subsp. ruderalis. Within each haplogroup which possesses a relatively independent distribution region, the wild and domesticated populations shared the most common haplotypes, indicating that there are multiregional origins for the domesticated crop. Contrast to the prevalent Central-Asia-Origin hypothesis of C. saltiva, molecular evidence reveals for the first time that the low latitude haplogroup (Haplogroup L) is the earliest divergent lineage, implying that Cannabis is probably originated in low latitude region.

A chemotaxonomic analysis of cannabinoid variation in Cannabis (Cannabaceae).

Karl Hillig,  Paul Mahlberg (2004)
Cannabinoids are important chemotaxonomic markers unique to Cannabis. Previous studies show that a plant's dry-weight ratio of Δ(9)-tetrahydrocannabinol (THC) to cannabidiol (CBD) can be assigned to one of three chemotypes and that alleles B(D) and B(T) encode alloenzymes that catalyze the conversion of cannabigerol to CBD and THC, respectively. In the present study, the frequencies of B(D) and B(T) in sample populations of 157 Cannabis accessions were determined from CBD and THC banding patterns, visualized by starch gel electrophoresis. Gas chromatography was used to quantify cannabinoid levels in 96 of the same accessions. The data were interpreted with respect to previous analyses of genetic and morphological variation in the same germplasm collection. Two biotypes (infraspecific taxa of unassigned rank) of C. sativa and four biotypes of C. indica were recognized. Mean THC levels and the frequency of B(T) were significantly higher in C. indica than C. sativa. The proportion of high THC/CBD chemotype plants in most accessions assigned to C. sativa was 25%. Plants with relatively high levels of tetrahydrocannabivarin (THCV) and/or cannabidivarin (CBDV) were common only in C. indica. This study supports a two-species concept of Cannabis.

Diversification of Rosaceae since the Late Cretaceous based on plastid phylogenomics.

Shu-Dong Zhang,  Jian-Jun Jin,  Si-Yun Chen … (2017)
Phylogenetic relationships in Rosaceae have long been problematic because of frequent hybridisation, apomixis and presumed rapid radiation, and their historical diversification has not been clarified. With 87 genera representing all subfamilies and tribes of Rosaceae and six of the other eight families of Rosales (outgroups), we analysed 130 newly sequenced plastomes together with 12 from GenBank in an attempt to reconstruct deep relationships and reveal temporal diversification of this family. Our results highlight the importance of improving sequence alignment and the use of appropriate substitution models in plastid phylogenomics. Three subfamilies and 16 tribes (as previously delimited) were strongly supported as monophyletic, and their relationships were fully resolved and strongly supported at most nodes. Rosaceae were estimated to have originated during the Late Cretaceous with evidence for rapid diversification events during several geological periods. The major lineages rapidly diversified in warm and wet habits during the Late Cretaceous, and the rapid diversification of genera from the early Oligocene onwards occurred in colder and drier environments. Plastid phylogenomics offers new and important insights into deep phylogenetic relationships and the diversification history of Rosaceae. The robust phylogenetic backbone and time estimates we provide establish a framework for future comparative studies on rosaceous evolution.

This article was submitted to Crop and Product Physiology, a section of the journal Frontiers in Plant Science