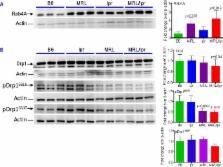 Antiphospholipid antibodies (aPL) constitute a diagnostic criterion of systemic lupus erythematosus (SLE), and aPL have been functionally linked to liver disease in patients with SLE. Since the mechanistic target of rapamycin (mTOR) is a regulator of oxidative stress, a pathophysiologic process that contributes to the development of aPL, this study was undertaken in a mouse model of SLE to examine the involvement of liver mitochondria in lupus pathogenesis.

Mitochondria were isolated from lupus‐prone MRL/lpr, C57BL/6.lpr, and MRL mice, age‐matched autoimmunity‐resistant C57BL/6 mice as negative controls, and transaldolase‐deficient mice, a strain that exhibits oxidative stress in the liver. Electron transport chain (ETC) activity was assessed using measurements of oxygen consumption. ETC proteins, which are regulators of mitochondrial homeostasis, and the mTOR complexes mTORC1 and mTORC2 were examined by Western blotting. Anticardiolipin (aCL) and anti–β 2‐glycoprotein I (anti‐β 2GPI) autoantibodies were measured by enzyme‐linked immunosorbent assay in mice treated with rapamycin or mice treated with a solvent control.

Mitochondrial oxygen consumption was increased in the livers of 4‐week‐old, disease‐free MRL/lpr mice relative to age‐matched controls. Levels of the mitophagy initiator dynamin‐related protein 1 (Drp1) were depleted while the activity of mTORC1 was increased in MRL/lpr mice. In turn, mTORC2 activity was decreased in MRL and MRL/lpr mice. In addition, levels of aCL and anti‐β 2GPI were elevated preceding the development of nephritis in 4‐week‐old MRL, C57BL/6.lpr, and MRL/lpr mice. Transaldolase‐deficient mice showed increased oxygen consumption, depletion of Drp1, activation of mTORC1, and elevated expression of NADH:ubiquinone oxidoreductase core subunit S3 (NDUFS3), a pro‐oxidant subunit of ETC complex I, as well as increased production of aCL and anti‐β 2GPI autoantibodies. Treatment with rapamycin selectively blocked mTORC1 activation, NDUFS3 expression, and aPL production both in transaldolase‐deficient mice and in lupus‐prone mice.

In lupus‐prone mice, mTORC1‐dependent mitochondrial dysfunction contributes to the generation of aPL, suggesting that such mechanisms may represent a treatment target in patients with SLE.

MAM (mitochondria-associated membranes) in mammalian cells: lipids and beyond.

Russell E Vance (2014)
One mechanism by which communication between the endoplasmic reticulum (ER) and mitochondria is achieved is by close juxtaposition between these organelles via mitochondria-associated membranes (MAM). The MAM consist of a region of the ER that is enriched in several lipid biosynthetic enzyme activities and becomes reversibly tethered to mitochondria. Specific proteins are localized, sometimes transiently, in the MAM. Several of these proteins have been implicated in tethering the MAM to mitochondria. In mammalian cells, formation of these contact sites between MAM and mitochondria appears to be required for key cellular events including the transport of calcium from the ER to mitochondria, the import of phosphatidylserine into mitochondria from the ER for decarboxylation to phosphatidylethanolamine, the formation of autophagosomes, regulation of the morphology, dynamics and functions of mitochondria, and cell survival. This review focuses on the functions proposed for MAM in mediating these events in mammalian cells. In light of the apparent involvement of MAM in multiple fundamental cellular processes, recent studies indicate that impaired contact between MAM and mitochondria might underlie the pathology of several human neurodegenerative diseases, including Alzheimer's disease. Moreover, MAM has been implicated in modulating glucose homeostasis and insulin resistance, as well as in some viral infections. Copyright © 2013 Elsevier B.V. All rights reserved.

Philippe Parrone,  Dominic James Farris,  Rodrigue Rossignol … (2007)
Mitochondria form a dynamic network, and it remains unclear how the alternate configurations interact with bioenergetics properties. The metabolic signals that link mitochondrial structure to its functional states have not been fully characterized. In this report, we analyze the bidirectional relationships between mitochondrial morphology and function in living human cells. First, we determined the effect of mitochondrial fission on energy production by using small interfering RNA (siRNA) targeting DRP1, which revealed the importance of membrane fluidity on the control of bioenergetics. Second, we followed the effect of rotenone, a specific inhibitor of respiratory chain complex I, which causes large structural perturbations, once a threshold was reached. Last, we followed changes in the mitochondrial network configuration in human cells that had been treated with modulators of oxidative phosphorylation, and in fibroblasts from two patients with mitochondrial disease where the respiratory rate, DeltaPsi and the generation of reactive oxygen species (ROS) were measured. Our data demonstrate that the relationship between mitochondrial network organization and bioenergetics is bidirectional, and we provide a model for analyzing the metabolic signals involved in this crosstalk.

Oxidative stress in the pathology and treatment of systemic lupus erythematosus.

Andras Perl (2013)
Oxidative stress is increased in systemic lupus erythematosus (SLE), and it contributes to immune system dysregulation, abnormal activation and processing of cell-death signals, autoantibody production and fatal comorbidities. Mitochondrial dysfunction in T cells promotes the release of highly diffusible inflammatory lipid hydroperoxides, which spread oxidative stress to other intracellular organelles and through the bloodstream. Oxidative modification of self antigens triggers autoimmunity, and the degree of such modification of serum proteins shows striking correlation with disease activity and organ damage in SLE. In T cells from patients with SLE and animal models of the disease, glutathione, the main intracellular antioxidant, is depleted and serine/threonine-protein kinase mTOR undergoes redox-dependent activation. In turn, reversal of glutathione depletion by application of its amino acid precursor, N-acetylcysteine, improves disease activity in lupus-prone mice; pilot studies in patients with SLE have yielded positive results that warrant further research. Blocking mTOR activation in T cells could conceivably provide a well-tolerated and inexpensive alternative approach to B-cell blockade and traditional immunosuppressive treatments. Nevertheless, compartmentalized oxidative stress in self-reactive T cells, B cells and phagocytic cells might serve to limit autoimmunity and its inhibition could be detrimental. Antioxidant therapy might also be useful in ameliorating damage caused by other treatments. This Review thus seeks to critically evaluate the complexity of oxidative stress and its relevance to the pathogenesis and treatment of SLE.