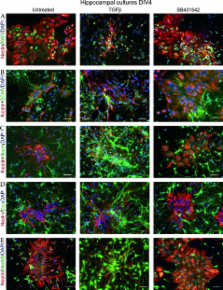 Transforming Growth Factor β (Tgfβ) and associated signaling effectors are expressed in the forebrain, but little is known about the role of this multifunctional cytokine during forebrain development. Using hippocampal and cortical primary cell cultures of developing mouse brains, this study identified Tgfβ-regulated genes not only associated with cell cycle exit of progenitors but also with adoption of neuronal cell fate. Accordingly, we observed not only an antimitotic effect of Tgfβ on progenitors but also an increased expression of neuronal markers in Tgfβ treated cultures. This effect was dependent upon Smad4. Furthermore, in vivo loss-of-function analyses using Tgfβ2 − / − /Tgfβ3 − / − double mutant mice showed the opposite effect of increased cell proliferation and fewer neurons in the cerebral cortex and hippocampus. Gata2, Runx1, and Nedd9 were candidate genes regulated by Tgfβ and known to be involved in developmental processes of neuronal progenitors. Using siRNA-mediated knockdown, we identified Nedd9 as an essential signaling component for the Tgfβ-dependent increase in neuronal cell fate. Expression of this scaffolding protein, which is mainly described as a signaling molecule of the β1-integrin pathway, was not only induced after Tgfβ treatment but was also associated with morphological changes of the Nestin-positive progenitor pool observed upon exposure to Tgfβ.

M. Abe, J Harpel, C N Metz … (1994)
Transforming growth factor-beta (TGF-beta) is a potent regulator of cellular differentiation, proliferation, migration, and protein expression. These properties have been exploited to create a variety of bioassays for detecting the mature growth factor. In this paper, we describe a highly sensitive and specific, nonradioactive quantitative bioassay for TGF-beta based on its ability to induce plasminogen activator inhibitor-1 (PAI-1) expression. Mink lung epithelial cells (MLEC) were stably transfected with an expression construct containing a truncated PAI-1 promoter fused to the firefly luciferase reporter gene. Addition of TGF-beta (0.2 to > 30 pM) to the transfectants resulted in a dose-dependent increase in luciferase activity in the cell lysates. Although responsive to TGF-beta, this promoter fragment was only minimally influenced by other known inducers of PAI-1 expression. When compared to the widely used MLEC assay, this assay demonstrated greater sensitivity and specificity, allowing quantification of TGF-beta in complex biological solutions.

F Verrecchia, M. Chu, A Mauviel (2001)
Despite major advances in the understanding of the intimate mechanisms of transforming growth factor-beta (TGF-beta) signaling through the Smad pathway, little progress has been made in the identification of direct target genes. In this report, using cDNA microarrays, we have focussed our attention on the characterization of extracellular matrix-related genes rapidly induced by TGF-beta in human dermal fibroblasts and attempted to identify the ones whose up-regulation by TGF-beta is Smad-mediated. For a gene to qualify as a direct Smad target, we postulated that it had to meet the following criteria: (1) rapid (30 min) and significant (at least 2-fold) elevation of steady-state mRNA levels upon TGF-beta stimulation, (2) activation of the promoter by both exogenous TGF-beta and co-transfected Smad3 expression vector, (3) up-regulation of promoter activity by TGF-beta blocked by both dominant-negative Smad3 and inhibitory Smad7 expression vectors, and (4) promoter transactivation by TGF-beta not possible in Smad3(-/-) mouse embryo fibroblasts. Using this stringent approach, we have identified COL1A2, COL3A1, COL6A1, COL6A3, and tissue inhibitor of metalloproteases-1 as definite TGF-beta/Smad3 targets. Extrapolation of this approach to other extracellular matrix-related gene promoters also identified COL1A1 and COL5A2, but not COL6A2, as novel Smad targets. Together, these results represent a significant step toward the identification of novel, early-induced Smad-dependent TGF-beta target genes in fibroblasts.