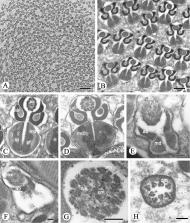 The sperm ultrastructure of two ricaniid species, Pochazia shantungensis (Chou & Lu) and Ricania speculum (Walker), was investigated using light and transmission electron microscopy. Both species have monoflagellate sperm, the shape and ultrastructure of the mature spermatozoon of these two species are similar in morphology, and 128 spermatozoa are organized into sperm bundles with their heads embedded in a homogenous matrix forming the spermatodesmata. The individual sperm is filiform and includes the head, neck and flagellum. The head is needle-like, with a bilayer acrosome and an inferior elongated nucleus which is formed of homogeneously compact and electron-dense chromatin. The neck region is indistinct and is comprised of the centriole and centriole adjunct with a homogeneous dense substance. The long flagellum has the typical 9 + 9 + 2 axoneme microtubule pattern and two symmetrical mitochondrial derivatives with an orderly array of cristae flanking both sides, and a pair of well-developed fishhook-shaped accessory bodies. Current evidence shows that ricaniid species have D-shaped mitochondrial derivatives in cross-section and a serrated electron-dense region. The phylogenetic relationship of Fulgoroidea with other superfamilies in Auchenorrhyncha is briefly discussed.

INSECT SPERM: THEIR STRUCTURE AND MORPHOGENESIS

Phylogenomics and the evolution of hemipteroid insects

Kevin Johnson,  Christopher Dietrich,  Frank Friedrich … (2018)
Hemipteroid insects (Paraneoptera), with over 10% of all known insect diversity, are a major component of terrestrial and aquatic ecosystems. Previous phylogenetic analyses have not consistently resolved the relationships among major hemipteroid lineages. We provide maximum likelihood-based phylogenomic analyses of a taxonomically comprehensive dataset comprising sequences of 2,395 single-copy, protein-coding genes for 193 samples of hemipteroid insects and outgroups. These analyses yield a well-supported phylogeny for hemipteroid insects. Monophyly of each of the three hemipteroid orders (Psocodea, Thysanoptera, and Hemiptera) is strongly supported, as are most relationships among suborders and families. Thysanoptera (thrips) is strongly supported as sister to Hemiptera. However, as in a recent large-scale analysis sampling all insect orders, trees from our data matrices support Psocodea (bark lice and parasitic lice) as the sister group to the holometabolous insects (those with complete metamorphosis). In contrast, four-cluster likelihood mapping of these data does not support this result. A molecular dating analysis using 23 fossil calibration points suggests hemipteroid insects began diversifying before the Carboniferous, over 365 million years ago. We also explore implications for understanding the timing of diversification, the evolution of morphological traits, and the evolution of mitochondrial genome organization. These results provide a phylogenetic framework for future studies of the group.

Jason Cryan,  J. Urban (2007)
The planthopper superfamily Fulgoroidea (Insecta: Hemiptera) comprises approximately 20 described insect families, depending on which classification is followed. Multiple competing hypotheses of fulgoroid phylogeny have been published, based on either morphological character coding or DNA sequence data; however, those hypotheses disagree in several key aspects regarding the evolution of planthoppers. The current paper seeks to test these hypotheses, including the Asche (Asche, M. 1987. Preliminary thoughts on the phylogeny of Fulgoromorpha (Homoptera Auchenorrhyncha). In: Proceedings of the 6th Auchenorrhyncha Meeting, Turin, Italy, 7-11 September, 1987, pp. 47-53.) hypothesis of a trend in ovipositor structure, which may be correlated with planthopper feeding ecology. Presented here are phylogenetic reconstructions of Fulgoroidea based on analysis of DNA nucleotide sequence data from four loci (18S rDNA, 28S rDNA, Histone 3, and Wingless) sequenced from 83 exemplar taxa representing 18 planthopper families and outgroups. Data sets were analyzed separately and in various combinations under the maximum parsimony criterion, and the total combined dataset was analyzed via both maximum parsimony and partitioned Bayesian criteria; results of the combined analyses were concordant across reconstruction paradigms. Relationships recovered suggest several major planthopper lineages, including: (1) Delphacidae+Cixiidae; (2) Kinnaridae+Meenoplidae; (3) Fulgoridae+Dictyopharidae; (4) Lophopidae+Eurybrachidae (possibly+Flatidae); (5) Ricaniidae+Caliscelidae (possibly+Tropiduchidae). Results also suggest the placement of Achilixiidae outside of Cixiidae and of Tettigometridae as one of the more recently diversified lineages within Fulgoroidea. The resulting phylogeny supports Asche's (1987) hypothesis of a functional trend in ovipositor structure across families.