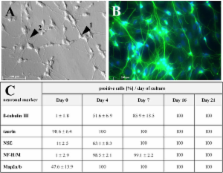 One of the most promising options for treatment of stroke using adult stem cells are human umbilical cord blood (HUCB) cells that were already approved for therapeutic efficacy in vivo. However, complexity of animal models has thus far limited the understanding of beneficial cellular mechanisms. To address the influence of HUCB cells on neuronal tissue after stroke we established and employed a human in vitro model of neuronal hypoxia using fully differentiated vulnerable SH-SY5Y cells. These cells were incubated under an oxygen-reduced atmosphere (O 2< 1%) for 48 hours. Subsequently, HUCB mononuclear cells (MNC) were added to post-hypoxic neuronal cultures. These cultures were characterized regarding to the development of apoptosis and necrosis over three days. Based on this we investigated the therapeutic influence of HUCB MNC on the progression of apoptotic cell death. The impact of HUCB cells and hypoxia on secretion of neuroprotective and inflammatory cytokines, chemokines and expression of adhesion molecules was proved.

Hypoxic cultivation of neurons initially induced a rate of 26% ± 13% of apoptosis. Hypoxia also caused an enhanced expression of Caspase-3 and cleaved poly(ADP-ribose) polymerase (PARP). Necrosis was only detected in low amounts. Within the next three days rate of apoptosis in untreated hypoxic cultures cumulated to 85% ± 11% (p ≤ 0.001). Specific cytokine (VEGF) patterns also suggest anti-apoptotic strategies of neuronal cells. Remarkably, the administration of MNC showed a noticeable reduction of apoptosis rates to levels of normoxic control cultures (7% ± 3%; p ≤ 0.001). In parallel, clustering of administered MNC next to axons and somata of neuronal cells was observed. Furthermore, MNC caused a pronounced increase of chemokines (CCL5; CCL3 and CXCL10).

We established an in vitro model of neuronal hypoxia that affords the possibility to investigate both, apoptotic neuronal cell death and neuroprotective therapies. Here we employed the therapeutic model to study neuroprotective properties of HUCB cells.

We hypothesize that the neuroprotective effect of MNC was due to anti-apoptotic mechanisms related to direct cell-cell contacts with injured neuronal cells and distinct changes in neuroprotective, inflammatory cytokines as well as to the upregulation of chemokines within the co-cultures.

Blaine White,  Jonathon M Sullivan,  Donald DeGracia … (2000)
Brain ischemia and reperfusion engage multiple independently-fatal terminal pathways involving loss of membrane integrity in partitioning ions, progressive proteolysis, and inability to check these processes because of loss of general translation competence and reduced survival signal-transduction. Ischemia results in rapid loss of high-energy phosphate compounds and generalized depolarization, which induces release of glutamate and, in selectively vulnerable neurons (SVNs), opening of both voltage-dependent and glutamate-regulated calcium channels. This allows a large increase in cytosolic Ca(2+) associated with activation of mu-calpain, calcineurin, and phospholipases with consequent proteolysis of calpain substrates (including spectrin and eIF4G), activation of NOS and potentially of Bad, and accumulation of free arachidonic acid, which can induce depletion of Ca(2+) from the ER lumen. A kinase that shuts off translation initiation by phosphorylating the alpha-subunit of eukaryotic initiation factor-2 (eIF2alpha) is activated either by adenosine degradation products or depletion of ER lumenal Ca(2+). Early during reperfusion, oxidative metabolism of arachidonate causes a burst of excess oxygen radicals, iron is released from storage proteins by superoxide-mediated reduction, and NO is generated. These events result in peroxynitrite generation, inappropriate protein nitrosylation, and lipid peroxidation, which ultrastructurally appears to principally damage the plasmalemma of SVNs. The initial recovery of ATP supports very rapid eIF2alpha phosphorylation that in SVNs is prolonged and associated with a major reduction in protein synthesis. High catecholamine levels induced by the ischemic episode itself and/or drug administration down-regulate insulin secretion and induce inhibition of growth-factor receptor tyrosine kinase activity, effects associated with down-regulation of survival signal-transduction through the Ras pathway. Caspase activation occurs during the early hours of reperfusion following mitochondrial release of caspase 9 and cytochrome c. The SVNs find themselves with substantial membrane damage, calpain-mediated proteolytic degradation of eIF4G and cytoskeletal proteins, altered translation initiation mechanisms that substantially reduce total protein synthesis and impose major alterations in message selection, down-regulated survival signal-transduction, and caspase activation. This picture argues powerfully that, for therapy of brain ischemia and reperfusion, the concept of single drug intervention (which has characterized the approaches of basic research, the pharmaceutical industry, and clinical trials) cannot be effective. Although rigorous study of multi-drug protocols is very demanding, effective therapy is likely to require (1) peptide growth factors for early activation of survival-signaling pathways and recovery of translation competence, (2) inhibition of lipid peroxidation, (3) inhibition of calpain, and (4) caspase inhibition. Examination of such protocols will require not only characterization of functional and histopathologic outcome, but also study of biochemical markers of the injury processes to establish the role of each drug.

Administration of CD34+ cells after stroke enhances neurogenesis via angiogenesis in a mouse model.

Hiroyuki Nishimura,  Tomohiro Matsuyama,  Hiroaki Naritomi … (2004)
Thrombo-occlusive cerebrovascular disease resulting in stroke and permanent neuronal loss is an important cause of morbidity and mortality. Because of the unique properties of cerebral vasculature and the limited reparative capability of neuronal tissue, it has been difficult to devise effective neuroprotective therapies in cerebral ischemia. Our results demonstrate that systemic administration of human cord blood-derived CD34(+) cells to immunocompromised mice subjected to stroke 48 hours earlier induces neovascularization in the ischemic zone and provides a favorable environment for neuronal regeneration. Endogenous neurogenesis, suppressed by an antiangiogenic agent, is accelerated as a result of enhanced migration of neuronal progenitor cells to the damaged area, followed by their maturation and functional recovery. Our data suggest an essential role for CD34(+) cells in promoting directly or indirectly an environment conducive to neovascularization of ischemic brain so that neuronal regeneration can proceed.