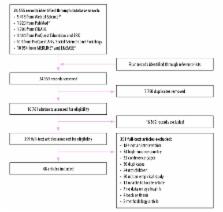 To review interventions improving eye-care services for schoolchildren in low- and middle-income countries.

We searched online databases (CINAHL, Embase®, ERIC, MEDLINE®, ProQuest, PubMed® and Web of Science TM) for articles published between January 2000 and May 2018. Eligible studies evaluated the delivery of school-based eye-care programmes, reporting results in terms of spectacle compliance rates, quality of screening or attitude changes. We considered studies to be ineligible if no follow-up data were reported. Two authors screened titles, abstracts and full-text articles, and we extracted data from eligible full-text articles using the availability, accessibility, acceptability and quality rights-based conceptual framework.

Of 24 559 publications screened, 48 articles from 13 countries met the inclusion criteria. Factors involved in the successful provision of school-based eye-care interventions included communication between health services and schools, the willingness of schools to schedule sufficient time, and the support of principals, staff and parents. Several studies found that where the numbers of eye-care specialists are insufficient, training teachers in vision screening enables the provision of a good-quality and cost–effective service. As well as the cost of spectacles, barriers to seeking eye-care included poor literacy, misconceptions and lack of eye health knowledge among parents.

The provision of school-based eye-care programmes has great potential to reduce ocular morbidity and developmental delays caused by childhood vision impairment and blindness. Policy-based support, while also attempting to reduce misconceptions and stigma among children and their parents, is crucial for continued access.

The number of ophthalmologists in practice and training worldwide: a growing gap despite more than 200,000 practitioners.

Increased mortality in children with mild vitamin A deficiency.

A Sommer, I Tarwotjo, G Hussaini … (1983)
An average of 3481 preschool-age rural Indonesian children were re-examined every 3 months for 18 months. The mortality rate among children with mild xerophthalmia (night blindness and/or Bitot's spots) was on average 4 times the rate, and in some age groups 8 to 12 times the rate, among children without xerophthalmia. Mortality increased, almost linearly, with the severity of mild xerophthalmia (night blindness, Bitot's spots, and the two combined). These relations persisted after stratification for respiratory disease, wasting, gastroenteritis, pedal oedema, and childhood exanthems. Mild vitamin A deficiency was directly associated with at least 16% of all deaths in children aged from 1 to 6 years. These results suggest that mild xerophthalmia justifies vigorous community-wide intervention, as much to reduce childhood mortality as to prevent blindness, and that night blindness and Bitot's spots are as important as anthropometric indices in screening children to determine which of them need medical and nutritional attention.

Jennifer J. Palmer, Farai Chinanayi, Alice Gilbert … (2014)
Background Development of human resources for eye health (HReH) is a major focus of the Global Action Plan 2014 to 2019 to reduce the prevalence of avoidable visual impairment by 25% by the year 2019. The eye health workforce is thought to be much smaller in sub-Saharan Africa than in other regions of the world but data to support this for policy-making is scarce. We collected HReH and cataract surgeries data from 21 countries in sub-Sahara to estimate progress towards key suggested population-based VISION 2020 HReH indicators and cataract surgery rates (CSR) in 2011. Methods Routinely collected data on practitioner and surgery numbers in 2011 was requested from national eye care coordinators via electronic questionnaires. Telephone and e-mail discussions were used to determine data collection strategies that fit the national context and to verify reported data quality. Information was collected on six practitioner cadres: ophthalmologists, cataract surgeons, ophthalmic clinical officers, ophthalmic nurses, optometrists and ‘mid-level refractionists’ and combined with publicly available population data to calculate practitioner to population ratios and CSRs. Associations with development characteristics were conducted using Wilcoxon rank sum tests and Spearman rank correlations. Results HReH data was not easily available. A minority of countries had achieved the suggested VISION 2020 targets in 2011; five countries for ophthalmologists/cataract surgeons, four for ophthalmic nurses/clinical officers and two for CSR. All countries were below target for optometrists, even when other cadres who perform refractions as a primary duty were considered. The regional (sample) ratio for surgeons (ophthalmologists and cataract surgeons) was 2.9 per million population, 5.5 for ophthalmic clinical officers and nurses, 3.7 for optometrists and other refractionists, and 515 for CSR. A positive correlation between GDP and CSR as well as many practitioner ratios was observed (CSR P = 0.0042, ophthalmologists P = 0.0034, cataract surgeons, ophthalmic nurses and optometrists 0.1 > P > 0.05). Conclusions With only a minority of countries in our sample having reached suggested ophthalmic cadre targets and none having reached targets for refractionists in 2011, substantially more targeted investment in HReH may be needed for VISION 2020 aims to be achieved in sub-Saharan Africa.

This is an open access article distributed under the terms of the Creative Commons Attribution IGO License ( http://creativecommons.org/licenses/by/3.0/igo/legalcode), which permits unrestricted use, distribution, and reproduction in any medium, provided the original work is properly cited. In any reproduction of this article there should not be any suggestion that WHO or this article endorse any specific organization or products. The use of the WHO logo is not permitted. This notice should be preserved along with the article's original URL.