Self-Referential Cognition and Empathy in Autism 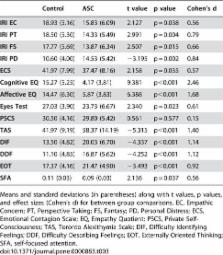 Individuals with autism spectrum conditions (ASC) have profound impairments in the interpersonal social domain, but it is unclear if individuals with ASC also have impairments in the intrapersonal self-referential domain. We aimed to evaluate across several well validated measures in both domains, whether both self-referential cognition and empathy are impaired in ASC and whether these two domains are related to each other.

Thirty adults aged 19-45, with Asperger Syndrome or high-functioning autism and 30 age, sex, and IQ matched controls participated in the self-reference effect (SRE) paradigm. In the SRE paradigm, participants judged adjectives in relation to the self, a similar close other, a dissimilar non-close other, or for linguistic content. Recognition memory was later tested. After the SRE paradigm, several other complimentary self-referential cognitive measures were taken. Alexithymia and private self-consciousness were measured via self-report. Self-focused attention was measured on the Self-Focus Sentence Completion task. Empathy was measured with 3 self-report instruments and 1 performance measure of mentalizing (Eyes test). Self-reported autistic traits were also measured with the Autism Spectrum Quotient (AQ). Although individuals with ASC showed a significant SRE in memory, this bias was decreased compared to controls. Individuals with ASC also showed reduced memory for the self and a similar close other and also had concurrent impairments on measures of alexithymia, self-focused attention, and on all 4 empathy measures. Individual differences in self-referential cognition predicted mentalizing ability and self-reported autistic traits. More alexithymia and less self memory was predictive of larger mentalizing impairments and AQ scores regardless of diagnosis. In ASC, more self-focused attention is associated with better mentalizing ability and lower AQ scores, while in controls, more self-focused attention is associated with decreased mentalizing ability and higher AQ scores. Increasing private self-consciousness also predicted better mentalizing ability, but only for individuals with ASC.

We conclude that individuals with ASC have broad impairments in both self-referential cognition and empathy. These two domains are also intrinsically linked and support predictions made by simulation theory. Our results also highlight a specific dysfunction in ASC within cortical midlines structures of the brain such as the medial prefrontal cortex.

Andrew S. Baron,  S Wheelwright,  Christine R Skinner … (2001)
Currently there are no brief, self-administered instruments for measuring the degree to which an adult with normal intelligence has the traits associated with the autistic spectrum. In this paper, we report on a new instrument to assess this: the Autism-Spectrum Quotient (AQ). Individuals score in the range 0-50. Four groups of subjects were assessed: Group 1: 58 adults with Asperger syndrome (AS) or high-functioning autism (HFA); Group 2: 174 randomly selected controls. Group 3: 840 students in Cambridge University; and Group 4: 16 winners of the UK Mathematics Olympiad. The adults with AS/HFA had a mean AQ score of 35.8 (SD = 6.5), significantly higher than Group 2 controls (M = 16.4, SD = 6.3). 80% of the adults with AS/HFA scored 32+, versus 2% of controls. Among the controls, men scored slightly but significantly higher than women. No women scored extremely highly (AQ score 34+) whereas 4% of men did so. Twice as many men (40%) as women (21%) scored at intermediate levels (AQ score 20+). Among the AS/HFA group, male and female scores did not differ significantly. The students in Cambridge University did not differ from the randomly selected control group, but scientists (including mathematicians) scored significantly higher than both humanities and social sciences students, confirming an earlier study that autistic conditions are associated with scientific skills. Within the sciences, mathematicians scored highest. This was replicated in Group 4, the Mathematics Olympiad winners scoring significantly higher than the male Cambridge humanities students. 6% of the student sample scored 32+ on the AQ. On interview, 11 out of 11 of these met three or more DSM-IV criteria for AS/HFA, and all were studying sciences/mathematics, and 7 of the 11 met threshold on these criteria. Test-retest and interrater reliability of the AQ was good. The AQ is thus a valuable instrument for rapidly quantifying where any given individual is situated on the continuum from autism to normality. Its potential for screening for autism spectrum conditions in adults of normal intelligence remains to be fully explored.

Meeting of minds: the medial frontal cortex and social cognition.

Christopher D. Frith,  Pietro Amodio (2006)
Social interaction is a cornerstone of human life, yet the neural mechanisms underlying social cognition are poorly understood. Recently, research that integrates approaches from neuroscience and social psychology has begun to shed light on these processes, and converging evidence from neuroimaging studies suggests a unique role for the medial frontal cortex. We review the emerging literature that relates social cognition to the medial frontal cortex and, on the basis of anatomical and functional characteristics of this brain region, propose a theoretical model of medial frontal cortical function relevant to different aspects of social cognitive processing.

Inclusion of Other in the Self Scale and the structure of interpersonal closeness.

Publisher ID: 07-PONE-RA-01977
DOI: 10.1371/journal.pone.0000883
PMC ID: 1964804
PubMed ID: 17849012
Copyright statement: Lombardo et al. This is an open-access article distributed under the terms of the Creative Commons Attribution License, which permits unrestricted use, distribution, and reproduction in any medium, provided the original author and source are credited.