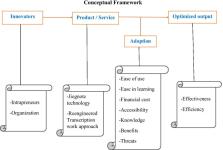 The study was a mixed methods project implemented from September to November 2020. The qualitative aspect of the study was phenomenological in perspective whereas the quantitative consisted of a randomized controlled trial (RCT) with a parallel design.

The study demonstrates utilities associated with intrapreneurship and technological innovation in an organization setting whereby, the Jiegnote technology that was developed by the researchers, had some impact on the optimization of the qualitative research value chain. This was observed through the effect size (impact) evaluations that were conducted to investigate the superiority of the Jiegnote software against the traditional transcription methods, in minimizing the average number of errors committed, and time taken to complete a transcription process.

How to Construct a Mixed Methods Research Design

Judith Schoonenboom, R. Johnson (2017)
This article provides researchers with knowledge of how to design a high quality mixed methods research study. To design a mixed study, researchers must understand and carefully consider each of the dimensions of mixed methods design, and always keep an eye on the issue of validity. We explain the seven major design dimensions: purpose, theoretical drive, timing (simultaneity and dependency), point of integration, typological versus interactive design approaches, planned versus emergent design, and design complexity. There also are multiple secondary dimensions that need to be considered during the design process. We explain ten secondary dimensions of design to be considered for each research study. We also provide two case studies showing how the mixed designs were constructed.

T test as a parametric statistic

Tae Kim (2015)
In statistic tests, the probability distribution of the statistics is important. When samples are drawn from population N (µ, σ2) with a sample size of n, the distribution of the sample mean X̄ should be a normal distribution N (µ, σ2/n). Under the null hypothesis µ = µ0, the distribution of statistics z = X ¯ - µ 0 σ / n should be standardized as a normal distribution. When the variance of the population is not known, replacement with the sample variance s 2 is possible. In this case, the statistics X ¯ - µ 0 s / n follows a t distribution (n-1 degrees of freedom). An independent-group t test can be carried out for a comparison of means between two independent groups, with a paired t test for paired data. As the t test is a parametric test, samples should meet certain preconditions, such as normality, equal variances and independence.