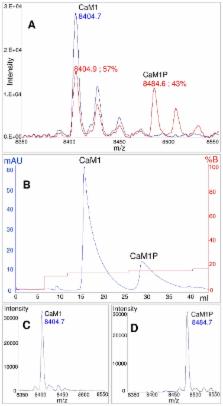 To improve our understanding of uranium toxicity, the determinants of uranyl affinity in proteins must be better characterized. In this work, we analyzed the contribution of a phosphoryl group on uranium binding affinity in a protein binding site, using the site 1 EF-hand motif of calmodulin. The recombinant domain 1 of calmodulin from A. thaliana was engineered to impair metal binding at site 2 and was used as a structured template. Threonine at position 9 of the loop was phosphorylated in vitro, using the recombinant catalytic subunit of protein kinase CK2. Hence, the T 9TKE 12 sequence was substituted by the CK2 recognition sequence TAAE. A tyrosine was introduced at position 7, so that uranyl and calcium binding affinities could be determined by following tyrosine fluorescence. Phosphorylation was characterized by ESI-MS spectrometry, and the phosphorylated peptide was purified to homogeneity using ion-exchange chromatography. The binding constants for uranyl were determined by competition experiments with iminodiacetate. At pH 6, phosphorylation increased the affinity for uranyl by a factor of ∼5, from K d = 25±6 nM to K d = 5±1 nM. The phosphorylated peptide exhibited a much larger affinity at pH 7, with a dissociation constant in the subnanomolar range (K d = 0.25±0.06 nM). FTIR analyses showed that the phosphothreonine side chain is partly protonated at pH 6, while it is fully deprotonated at pH 7. Moreover, formation of the uranyl-peptide complex at pH 7 resulted in significant frequency shifts of the ν as(P-O) and ν s(P-O) IR modes of phosphothreonine, supporting its direct interaction with uranyl. Accordingly, a bathochromic shift in ν as(UO 2) 2+ vibration (from 923 cm −1 to 908 cm −1) was observed upon uranyl coordination to the phosphorylated peptide. Together, our data demonstrate that the phosphoryl group plays a determining role in uranyl binding affinity to proteins at physiological pH.

Flavio Meggio,  Lorenzo Pinna,  Frank Rozsa … (2003)
CK2 (formerly termed "casein kinase 2") is a ubiquitous, highly pleiotropic and constitutively active Ser/Thr protein kinase whose implication in neoplasia, cell survival, and virus infection is supported by an increasing number of arguments. Here an updated inventory of 307 CK2 protein substrates is presented. More than one-third of these are implicated in gene expression and protein synthesis as being either transcriptional factors (60) or effectors of DNA/RNA structure (50) or translational elements. Also numerous are signaling proteins and proteins of viral origin or essential to virus life cycle. In comparison, only a minority of CK2 targets (a dozen or so) are classical metabolic enzymes. An analysis of 308 sites phosphorylated by CK2 highlights the paramount relevance of negatively charged side chains that are (by far) predominant over any other residues at positions n+3 (the most crucial one), n+1, and n+2. Based on this signature, it is predictable that proteins phosphorylated by CK2 are much more numerous than those identified to date, and it is possible that CK2 alone contributes to the generation of the eukaryotic phosphoproteome more so than any other individual protein kinase. The possibility that CK2 phosphosites play some global role, e.g., by destabilizing alpha helices, counteracting caspase cleavage, and generating adhesive motifs, will be discussed.

David Chin,  Anthony R. Means (2000)
Calmodulin is the best studied and prototypical example of the E-F-hand family of Ca2+-sensing proteins. Changes in intracellular Ca2+ concentration regulate calmodulin in three distinct ways. First, at the cellular level, by directing its subcellular distribution. Second, at the molecular level, by promoting different modes of association with many target proteins. Third, by directing a variety of conformational states in calmodulin that result in target-specific activation. The calmodulin-dependent regulation of protein kinases illustrates the potential mechanisms by which Ca2+-sensing proteins can recognize and generate affinity and specificity for effectors in a Ca2+-dependent manner.

Lorenzo Pinna (2002)
CK2 is an extremely conserved pleiotropic protein kinase with a growing list of more than 300 substrates, the majority of which are proteins implicated in signal transduction, gene expression and other nuclear functions. The CK2 phosphoacceptor sites are specified by multiple acidic residues, with the one at position +3 relative to the target residue being of crucial relevance. The CK2 holoenzyme is composed of two catalytic subunits (alphaalpha, alpha'alpha' or alphaalpha'), which are essential for cell viability, and a dimer of two non-catalytic beta subunits, whose precise function is still poorly understood. Although the beta subunits deeply affect many properties of CK2, both the isolated catalytic subunits and the holoenzyme are constitutively active, which is probably responsible for the oncogenic potential of CK2. Given the structure of the holoenzyme, the beta subunits could undergo reversible dissociation under physiological conditions and play a role as anchoring elements and/or as a docking platform for protein substrates and effectors. These unusual features are likely to be instrumental in the involvement of CK2 in a number of key biological functions, notably RNA synthesis, Wnt signaling, ubiquitination and cell survival.

This work was funded in part by the “Toxicologie” program of the Commissariat à l’énergie atomique et aux énergies alternatives (CEA) (CalUMo). RP acknowledges a PhD grant from the CEA international program IRTELIS. The funders had no role in study design, data collection and analysis, decision to publish, or preparation of the manuscript.