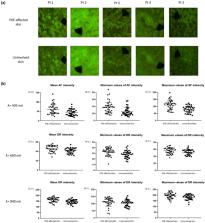 Pseudoxanthoma elasticum (PXE) is a rare multisystemic autosomal recessive connective tissue disease. In most cases, skin manifestations of PXE are the first to develop, followed later by severe ocular and cardiovascular complications. In our present study, in addition to dermoscopy, we introduced novel techniques, autofluorescence (AF) and diffuse reflectance (DR) imaging for the assessment of affected skin sites of five PXE patients. PXE-affected skin areas in most skin sites showed a previously observed pattern upon dermoscopic examination. With the novel imaging, PXE-affected skin lesions displayed high AF intensity. During our measurements, significantly higher mean, minimum and maximum AF intensity values were found in areas of PXE-affected skin when compared to uninvolved skin. Conversely, images acquired with the use of 660 and 940 nm illumination showed no mentionable difference. Our results demonstrate that AF imaging may be used in the in vivo diagnostics and quantification of the severity of the skin lesions of PXE patients. In addition, it is a safe, fast and cost-effective diagnostic method. AF imaging may be also used to objectively monitor the efficacy of the possible novel therapeutic approaches of PXE in the future.

ABCC6-mediated ATP secretion by the liver is the main source of the mineralization inhibitor inorganic pyrophosphate in the systemic circulation-brief report.

Robert Jansen,  Suzanne Duijst,  Sunny Mahakena … (2014)
Mutations in ABCC6 underlie the ectopic mineralization disorder pseudoxanthoma elasticum (PXE) and some forms of generalized arterial calcification of infancy, both of which affect the cardiovascular system. Using cultured cells, we recently showed that ATP-binding cassette subfamily C member 6 (ABCC6) mediates the cellular release of ATP, which is extracellularly rapidly converted into AMP and the mineralization inhibitor inorganic pyrophosphate (PPi). The current study was performed to determine which tissues release ATP in an ABCC6-dependent manner in vivo, where released ATP is converted into AMP and PPi, and whether human PXE ptients have low plasma PPi concentrations. Using cultured primary hepatocytes and in vivo liver perfusion experiments, we found that ABCC6 mediates the direct, sinusoidal, release of ATP from the liver. Outside hepatocytes, but still within the liver vasculature, released ATP is converted into AMP and PPi. The absence of functional ABCC6 in patients with PXE leads to strongly reduced plasma PPi concentrations. Hepatic ABCC6-mediated ATP release is the main source of circulating PPi, revealing an unanticipated role of the liver in systemic PPi homeostasis. Patients with PXE have a strongly reduced plasma PPi level, explaining their mineralization disorder. Our results indicate that systemic PPi is relatively stable and that PXE, generalized arterial calcification of infancy, and other ectopic mineralization disorders could be treated with PPi supplementation therapy. © 2014 American Heart Association, Inc.

The vascular phenotype in Pseudoxanthoma elasticum and related disorders: contribution of a genetic disease to the understanding of vascular calcification

Georges Leftheriotis,  Loukman Omarjee,  Olivier Saux … (2013)
Vascular calcification is a complex and dynamic process occurring in various physiological conditions such as aging and exercise or in acquired metabolic disorders like diabetes or chronic renal insufficiency. Arterial calcifications are also observed in several genetic diseases revealing the important role of unbalanced or defective anti- or pro-calcifying factors. Pseudoxanthoma elasticum (PXE) is an inherited disease (OMIM 264800) characterized by elastic fiber fragmentation and calcification in various soft conjunctive tissues including the skin, eyes, and arterial media. The PXE disease results from mutations in the ABCC6 gene, encoding an ATP-binding cassette transporter primarily expressed in the liver, kidneys suggesting that it is a prototypic metabolic soft-tissue calcifying disease of genetic origin. The clinical expression of the PXE arterial disease is characterized by an increased risk for coronary (myocardial infarction), cerebral (aneurysm and stroke), and lower limb peripheral artery disease. However, the structural and functional changes in the arterial wall induced by PXE are still unexplained. The use of a recombinant mouse model inactivated for the Abcc6 gene is an important tool for the understanding of the PXE pathophysiology although the vascular impact in this model remains limited to date. Overlapping of the PXE phenotype with other inherited calcifying diseases could bring important informations to our comprehension of the PXE disease.

Proposal for updating the pseudoxanthoma elasticum classification system and a review of the clinical findings.

Jos Twisk,  Johan Toonstra,  Milena de Paiva-Cavalcanti … (2010)
Pseudoxanthoma elasticum (PXE) is a systemic disorder affecting elastic tissues most markedly in skin, retina, and blood vessels. It is caused by mutations in the ABCC6 gene and is transmitted in an autosomal recessive fashion. In 1994 a new classification system for PXE was published as the result of a consensus conference. Since then the ABCC6 gene has been discovered. We propose that there is a need for a classification system incorporating all relevant systemic symptoms and signs, based on standardized clinical, histological, and molecular biological examination techniques. We re-evaluated the histopathologic PXE signs and propose a classification system with unambiguous criteria leading to a consistent diagnosis of definitive, probable, or possible PXE world-wide. We put this proposed classification forward to encourage further debate on the diagnosis of this multi-organ disorder. (c) 2010 Wiley-Liss, Inc.