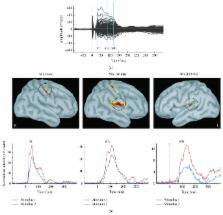 Sensory gating (SG), referring to an attenuated neural response to the second identical stimulus, is considered as preattentive processing in the central nervous system to filter redundant sensory inputs. Insufficient somatosensory SG has been found in the aged adults, particularly in the secondary somatosensory cortex (SII). However, it remains unclear which variables leading to the age-related somatosensory SG decline. There has been evidence showing a relationship between brain oscillations and cortical evoked excitability. Thus, this study used whole-head magnetoencephalography to record responses to paired-pulse electrical stimulation to the left median nerve in healthy young and elderly participants to test whether insufficient stimulus 1- (S1-) induced event-related desynchronization (ERD) contributes to a less-suppressed stimulus 2- (S2-) evoked response. Our analysis revealed that the minimum norm estimates showed age-related reduction of SG in the bilateral SII regions. Spectral power analysis showed that the elderly demonstrated significantly reduced alpha ERD in the contralateral SII (SIIc). Moreover, it was striking to note that lower S1-induced alpha ERD was associated with higher S2-evoked amplitudes in the SIIc among the aged adults. Conclusively, our findings suggest that age-related decline of somatosensory SG is partially attributed to the altered S1-induced oscillatory activity.

G. Pfurtscheller,  F.H. Lopes da Silva (1999)
An internally or externally paced event results not only in the generation of an event-related potential (ERP) but also in a change in the ongoing EEG/MEG in form of an event-related desynchronization (ERD) or event-related synchronization (ERS). The ERP on the one side and the ERD/ERS on the other side are different responses of neuronal structures in the brain. While the former is phase-locked, the latter is not phase-locked to the event. The most important difference between both phenomena is that the ERD/ERS is highly frequency band-specific, whereby either the same or different locations on the scalp can display ERD and ERS simultaneously. Quantification of ERD/ERS in time and space is demonstrated on data from a number of movement experiments.

Simon Hanslmayr,  Paul Sauseng,  Wolfgang Klimesch (2006)
The traditional belief is that the event-related alpha response can solely be described in terms of suppression or event-related desynchronization (ERD). Recent research, however, has shown that under certain conditions alpha responds reliably with an increase in amplitudes (event-related synchronization or ERS). ERS is elicited in situations, where subjects withhold or control the execution of a response and is obtained over sites that probably are under, or exert top-down control. Thus, we assume that alpha ERS reflects top-down, inhibitory control processes. This assumption leads over to the timing aspect of our hypothesis. By the very nature of an oscillation, rhythmic amplitude changes reflect rhythmic changes in excitation of a population of neurons. Thus, the time and direction of a change - described by phase - is functionally related to the timing of neuronal activation processes. A variety of findings supports this view and shows, e.g., that alpha phase coherence increases between task-relevant sites and that phase lag lies within a time range that is consistent with neuronal transmission speed. Another implication is that phase reset will be a powerful mechanism for the event-related timing of cortical processes. Empirical evidence suggests that the extent of phase locking is a functionally sensitive measure that is related to cognitive performance. Our general conclusion is that alpha ERS plays an active role for the inhibitory control and timing of cortical processing whereas ERD reflects the gradual release of inhibition associated with the emergence of complex spreading activation processes.

Magnetoencephalography—theory, instrumentation, and applications to noninvasive studies of the working human brain