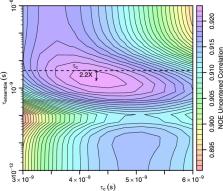 Nuclear magnetic resonance (NMR) has the unique advantage of elucidating the structure and dynamics of biomolecules in solution at physiological temperatures, where they are in constant movement on timescales from picoseconds to milliseconds. Such motions have been shown to be critical for enzyme catalysis, allosteric regulation, and molecular recognition. With NMR being particularly sensitive to these timescales, detailed information about the kinetics can be acquired. However, nearly all methods of NMR-based biomolecular structure determination neglect kinetics, which introduces a large approximation to the underlying physics, limiting both structural resolution and the ability to accurately determine molecular flexibility. Here we present the Kinetic Ensemble approach that uses a hierarchy of interconversion rates between a set of ensemble members to rigorously calculate Nuclear Overhauser Effect (NOE) intensities. It can be used to simultaneously refine both temporal and structural coordinates. By generalizing ideas from the extended model free approach, the method can analyze the amplitudes and kinetics of motions anywhere along the backbone or side chains. Furthermore, analysis of a large set of crystal structures suggests that NOE data contains a surprising amount of high-resolution information that is better modeled using our approach. The Kinetic Ensemble approach provides the means to unify numerous types of experiments under a single quantitative framework and more fully characterize and exploit kinetically distinct protein states. While we apply the approach here to the protein ubiquitin and cross validate it with previously derived datasets, the approach can be applied to any protein for which NOE data is available.

Model-free approach to the interpretation of nuclear magnetic resonance relaxation in macromolecules. 1. Theory and range of validity

Robert B Best,  Kresten Lindorff-Larsen,  Mark A DePristo … (2005)
We present a protocol for the experimental determination of ensembles of protein conformations that represent simultaneously the native structure and its associated dynamics. The procedure combines the strengths of nuclear magnetic resonance spectroscopy--for obtaining experimental information at the atomic level about the structural and dynamical features of proteins--with the ability of molecular dynamics simulations to explore a wide range of protein conformations. We illustrate the method for human ubiquitin in solution and find that there is considerable conformational heterogeneity throughout the protein structure. The interior atoms of the protein are tightly packed in each individual conformation that contributes to the ensemble but their overall behaviour can be described as having a significant degree of liquid-like character. The protocol is completely general and should lead to significant advances in our ability to understand and utilize the structures of native proteins.

Ubiquitin docking at the proteasome through a novel pleckstrin-homology domain interaction.

Suzanne Elsasser,  Ivan Dikic,  Naixia Zhang … (2008)
Targeted protein degradation is largely performed by the ubiquitin-proteasome pathway, in which substrate proteins are marked by covalently attached ubiquitin chains that mediate recognition by the proteasome. It is currently unclear how the proteasome recognizes its substrates, as the only established ubiquitin receptor intrinsic to the proteasome is Rpn10/S5a (ref. 1), which is not essential for ubiquitin-mediated protein degradation in budding yeast. In the accompanying manuscript we report that Rpn13 (refs 3-7), a component of the nine-subunit proteasome base, functions as a ubiquitin receptor, complementing its known role in docking de-ubiquitinating enzyme Uch37/UCHL5 (refs 4-6) to the proteasome. Here we merge crystallography and NMR data to describe the ubiquitin-binding mechanism of Rpn13. We determine the structure of Rpn13 alone and complexed with ubiquitin. The co-complex reveals a novel ubiquitin-binding mode in which loops rather than secondary structural elements are used to capture ubiquitin. Further support for the role of Rpn13 as a proteasomal ubiquitin receptor is demonstrated by its ability to bind ubiquitin and proteasome subunit Rpn2/S1 simultaneously. Finally, we provide a model structure of Rpn13 complexed to diubiquitin, which provides insights into how Rpn13 as a ubiquitin receptor is coupled to substrate deubiquitination by Uch37.