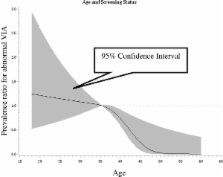 A total of 2,501 HIV-positive women participating in the cervical cancer screen-and-treat program in Abuja, Nigeria consented to this study and provided socio-demographic and clinical information. Log-binomial models were used to calculate relative risk (RR) and 95% confidence intervals (95%CI) for the risk factors of cervical pre-cancer and cancer.

The prevalence of screening positive lesions or cervical cancer was lower than most previous reports from Africa. HIV-positive Nigerian women were at a marginally increased risk of cervical pre-cancer and cancer. These findings highlight the need for more epidemiological studies of cervical cancer and pre-cancerous lesions among HIV-positive women in Africa and an improved understanding of incidence and risk factors.

George Maldonado,  Sander Greenland (1993)
In the absence of prior knowledge about population relations, investigators frequently employ a strategy that uses the data to help them decide whether to adjust for a variable. The authors compared the performance of several such strategies for fitting multiplicative Poisson regression models to cohort data: 1) the "change-in-estimate" strategy, in which a variable is controlled if the adjusted and unadjusted estimates differ by some important amount; 2) the "significance-test-of-the-covariate" strategy, in which a variable is controlled if its coefficient is significantly different from zero at some predetermined significance level; 3) the "significance-test-of-the-difference" strategy, which tests the difference between the adjusted and unadjusted exposure coefficients; 4) the "equivalence-test-of-the-difference" strategy, which significance-tests the equivalence of the adjusted and unadjusted exposure coefficients; and 5) a hybrid strategy that takes a weighted average of adjusted and unadjusted estimates. Data were generated from 8,100 population structures at each of several sample sizes. The performance of the different strategies was evaluated by computing bias, mean squared error, and coverage rates of confidence intervals. At least one variation of each strategy that was examined performed acceptably. The change-in-estimate and equivalence-test-of-the-difference strategies performed best when the cut-point for deciding whether crude and adjusted estimates differed by an important amount was set to a low value (10%). The significance test strategies performed best when the alpha level was set to much higher than conventional levels (0.20).

Sylvain Durrleman,  Richard T. Simon (1989)
We describe the use of cubic splines in regression models to represent the relationship between the response variable and a vector of covariates. This simple method can help prevent the problems that result from inappropriate linearity assumptions. We compare restricted cubic spline regression to non-parametric procedures for characterizing the relationship between age and survival in the Stanford Heart Transplant data. We also provide an illustrative example in cancer therapeutics.

Easy SAS calculations for risk or prevalence ratios and differences.