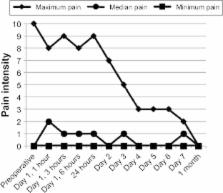 Risk factors associated with postoperative pain intensity and duration, as well as consumption of analgesics after ophthalmic surgery are poorly understood.

A prospective study was conducted among adults (N=226) who underwent eye surgery at the University Hospital Split, Croatia. A day before the surgery, the patients filled out questionnaires assessing personality, anxiety, pain catastrophizing, sociodemographics and were given details about the procedure, anesthesia, and analgesia for each postoperative day. All scales were previously used for the Croatian population. The intensity of pain was measured using a numerical rating scale from 0 to 10, where 0 was no pain and 10 was the worst imaginable pain. The intensity of pain was measured before the surgery and then 1 hour, 3 hours, 6 hours, and 24 hours after surgery, and then once a day until discharge from the hospital. Univariate and multivariate analyses were performed.

Theoretical perspectives on the relation between catastrophizing and pain.

Michael Sullivan,  Beverly Thorn,  Jennifer Haythornthwaite … (2001)
The tendency to "catastrophize" during painful stimulation contributes to more intense pain experience and increased emotional distress. Catastrophizing has been broadly conceived as an exaggerated negative "mental set" brought to bear during painful experiences. Although findings have been consistent in showing a relation between catastrophizing and pain, research in this area has proceeded in the relative absence of a guiding theoretical framework. This article reviews the literature on the relation between catastrophizing and pain and examines the relative strengths and limitations of different theoretical models that could be advanced to account for the pattern of available findings. The article evaluates the explanatory power of a schema activation model, an appraisal model, an attention model, and a communal coping model of pain perception. It is suggested that catastrophizing might best be viewed from the perspective of hierarchical levels of analysis, where social factors and social goals may play a role in the development and maintenance of catastrophizing, whereas appraisal-related processes may point to the mechanisms that link catastrophizing to pain experience. Directions for future research are suggested.

Jean Wong,  Amir Abrishami,  Hui Yun Vivian Ip … (2009)
Pain is a subjective and multidimensional experience that is often inadequately managed in clinical practice. Effective control of postoperative pain is important after anesthesia and surgery. A systematic review was conducted to identify the independent predictive factors for postoperative pain and analgesic consumption. The authors identified 48 eligible studies with 23,037 patients included in the final analysis. Preoperative pain, anxiety, age, and type of surgery were four significant predictors for postoperative pain. Type of surgery, age, and psychological distress were the significant predictors for analgesic consumption. Gender was not found to be a consistent predictor as traditionally believed. Early identification of the predictors in patients at risk of postoperative pain will allow more effective intervention and better management. The coefficient of determination of the predictive models was less than 54%. More vigorous studies with robust statistics and validated designs are needed to investigate this field of interest.

The measurement of postoperative pain: a comparison of intensity scales in younger and older surgical patients.

Gavin Chan,  N Weizblit,  Lucia Gagliese … (2005)
The psychometric properties of pain intensity scales for the assessment of postoperative pain across the adult lifespan have not been reported. The objective of this study was to compare the feasibility and validity of the Numeric Rating Scale (NRS), Verbal Descriptor Scale (VDS), and Visual Analog Scale (horizontal (VAS-H) and vertical (VAS-V) line orientation) for the assessment of pain intensity in younger and older surgical patients. At 24h following surgery, 504 patients, who were receiving i.v. morphine via patient-controlled analgesia, completed the pain intensity measures and the McGill Pain Questionnaire (MPQ) in a randomized order. They were asked which scale was easiest to complete, the most accurate measure, and which they would most prefer to complete in the future, as an index of face validity. The amount of opioid self-administered was recorded. Age differences in postoperative pain intensity were not found. However, elderly patients obtained lower MPQ scores and self-administered less morphine than younger people. Psychometric analyses suggested that the NRS was the preferred pain intensity scale. It had low error rates, and higher face, convergent, divergent and criterion validity than the other scales. Most importantly, its properties were not age-related. The VDS also had a favourable profile with low error rates and good face, convergent and criterion validity. Finally, difficulties with VAS use among the elderly were identified, including high rates of unscorable data and low face validity. Its use with elderly postoperative patients should be discouraged.