Variation of Goliathus orientalis (Moser, 1909) Elytra Nanostructurations and Their Impact on Wettability 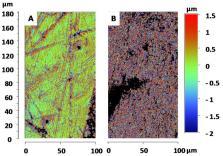 Among the different species of flower beetles, there is one of particular notoriety: the Goliath beetle. This large insect can grow up to 11 cm long and is well-known for its distinctive black and white shield. In this paper, we focus on a particular Goliathus species: G. orientalis (Moser, 1909). We investigated the variations in properties of both the black and white parts of the upper face of G. orientalis; more precisely, the variation in surface properties with respect to the wettability of these two parts. This work reveals that the white parts of the shield have a higher hydrophobic character when compared to the black regions. While the black parts are slightly hydrophobic ( θ = 91 ± 5°) and relatively smooth, the white parts are highly hydrophobic ( θ = 130 ± 3°) with strong water adhesion (parahydrophobic); similar to the behavior observed for rose petals. Roughness and morphology analyses revealed significant differences between the two parts, and, hence, may explain the change in wettability. The white surfaces are covered with horizontally aligned nanohairs. Interestingly, vertically aligned microhairs are also present on the white surface. Furthermore, the surfaces of the microhairs are not smooth, they contain nanogrooves that are qualitatively similar to those observed in cactus spines. The nanogrooves may have an extremely important function regarding water harvesting, as they preferentially direct the migration of water droplets; this process could be mimicked in the future to capture and guide a large volume of water.

Lin Feng,  Ying Zhu,  Fan-Nv Xia … (2008)
Hierarchical micropapillae and nanofolds are known to exist on the petals' surfaces of red roses. These micro- and nanostructures provide a sufficient roughness for superhydrophobicity and yet at the same time a high adhesive force with water. A water droplet on the surface of the petal appears spherical in shape, which cannot roll off even when the petal is turned upside down. We define this phenomenon as the "petal effect" as compared with the popular "lotus effect". Artificial fabrication of biomimic polymer films, with well-defined nanoembossed structures obtained by duplicating the petal's surface, indicates that the superhydrophobic surface and the adhesive petal are in Cassie impregnating wetting state.

Water capture by a desert beetle.

C. Lawrence,  M. A. Parker (2001)
Some beetles in the Namib Desert collect drinking water from fog-laden wind on their backs. We show here that these large droplets form by virtue of the insect's bumpy surface, which consists of alternating hydrophobic, wax-coated and hydrophilic, non-waxy regions. The design of this fog-collecting structure can be reproduced cheaply on a commercial scale and may find application in water-trapping tent and building coverings, for example, or in water condensers and engines.