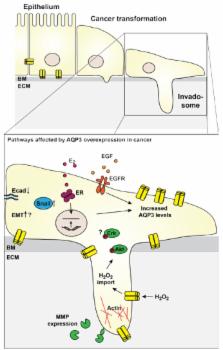 Increasing evidence suggests that the water/glycerol channel aquaporin-3 (AQP3) plays a pivotal role in cancer metastasis. AQP3 knockout mice were resistant to skin tumor formation and overexpression correlated with metastasis and poor prognosis in patients with breast or gastric cancer. In cultured cancer cells, increased AQP3 expression stimulated several intracellular signaling pathways and resulted in increased cell proliferation, migration, and invasion as well as aggravation of epithelial-to-mesenchymal transition. Besides AQP facilitated water transport at the leading edge of migrating cells, AQP3 signaling mechanisms are beginning to be unraveled. Here, we give a thorough review of current knowledge regarding AQP3 expression in cancer and how AQP3 contributes to cancer progression via signaling that modulates cellular mechanisms. This review article will expand our understanding of the known pathophysiological findings regarding AQP3 in cancer.

Christophe Maurel,  Yann Boursiac,  Doan-Trung Luu … (2015)
Aquaporins are membrane channels that facilitate the transport of water and small neutral molecules across biological membranes of most living organisms. In plants, aquaporins occur as multiple isoforms reflecting a high diversity of cellular localizations, transport selectivity, and regulation properties. Plant aquaporins are localized in the plasma membrane, endoplasmic reticulum, vacuoles, plastids and, in some species, in membrane compartments interacting with symbiotic organisms. Plant aquaporins can transport various physiological substrates in addition to water. Of particular relevance for plants is the transport of dissolved gases such as carbon dioxide and ammonia or metalloids such as boron and silicon. Structure-function studies are developed to address the molecular and cellular mechanisms of plant aquaporin gating and subcellular trafficking. Phosphorylation plays a central role in these two processes. These mechanisms allow aquaporin regulation in response to signaling intermediates such as cytosolic pH and calcium, and reactive oxygen species. Combined genetic and physiological approaches are now integrating this knowledge, showing that aquaporins play key roles in hydraulic regulation in roots and leaves, during drought but also in response to stimuli as diverse as flooding, nutrient availability, temperature, or light. A general hydraulic control of plant tissue expansion by aquaporins is emerging, and their role in key developmental processes (seed germination, emergence of lateral roots) has been established. Plants with genetically altered aquaporin functions are now tested for their ability to improve plant tolerance to stresses. In conclusion, research on aquaporins delineates ever expanding fields in plant integrative biology thereby establishing their crucial role in plants.