A new glaucoma hypothesis: a role of glymphatic system dysfunction 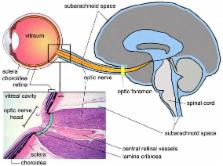 Journal: Fluids and Barriers of the CNS

In a recent review article titled “A new look at cerebrospinal fluid circulation”, Brinker et al. comprehensively described novel insights from molecular and cellular biology as well as neuroimaging research, which indicate that cerebrospinal fluid (CSF) physiology is much more complex than previously believed. The glymphatic system is a recently defined brain-wide paravascular pathway for CSF and interstitial fluid exchange that facilitates efficient clearance of interstitial solutes, including amyloid-β, from the brain. Although further studies are needed to substantiate the functional significance of the glymphatic concept, one implication is that glymphatic pathway dysfunction may contribute to the deficient amyloid-β clearance in Alzheimer’s disease. In this paper, we review several lines of evidence suggesting that the glymphatic system may also have potential clinical relevance for the understanding of glaucoma. As a clinically acceptable MRI-based approach to evaluate glymphatic pathway function in humans has recently been developed, a unique opportunity now exists to investigate whether suppression of the glymphatic system contributes to the development of glaucoma. The observation of a dysfunctional glymphatic system in patients with glaucoma would provide support for the hypothesis recently proposed by our group that CSF circulatory dysfunction may play a contributory role in the pathogenesis of glaucomatous damage. This would suggest a new hypothesis for glaucoma, which, just like Alzheimer’s disease, might be considered then as an imbalance between production and clearance of neurotoxins, including amyloid-β.

Tian Feng,  Helene Benveniste,  Hedok Lee … (2013)
The glymphatic system is a recently defined brain-wide paravascular pathway for cerebrospinal fluid (CSF) and interstitial fluid (ISF) exchange that facilitates efficient clearance of solutes and waste from the brain. CSF enters the brain along para-arterial channels to exchange with ISF, which is in turn cleared from the brain along para-venous pathways. Because soluble amyloid β clearance depends on glymphatic pathway function, we proposed that failure of this clearance system contributes to amyloid plaque deposition and Alzheimer's disease progression. Here we provide proof of concept that glymphatic pathway function can be measured using a clinically relevant imaging technique. Dynamic contrast-enhanced MRI was used to visualize CSF-ISF exchange across the rat brain following intrathecal paramagnetic contrast agent administration. Key features of glymphatic pathway function were confirmed, including visualization of para-arterial CSF influx and molecular size-dependent CSF-ISF exchange. Whole-brain imaging allowed the identification of two key influx nodes at the pituitary and pineal gland recesses, while dynamic MRI permitted the definition of simple kinetic parameters to characterize glymphatic CSF-ISF exchange and solute clearance from the brain. We propose that this MRI approach may provide the basis for a wholly new strategy to evaluate Alzheimer's disease susceptibility and progression in the live human brain.

Thomas Brinker,  Edward Stopa,  John Morrison … (2014)
According to the traditional understanding of cerebrospinal fluid (CSF) physiology, the majority of CSF is produced by the choroid plexus, circulates through the ventricles, the cisterns, and the subarachnoid space to be absorbed into the blood by the arachnoid villi. This review surveys key developments leading to the traditional concept. Challenging this concept are novel insights utilizing molecular and cellular biology as well as neuroimaging, which indicate that CSF physiology may be much more complex than previously believed. The CSF circulation comprises not only a directed flow of CSF, but in addition a pulsatile to and fro movement throughout the entire brain with local fluid exchange between blood, interstitial fluid, and CSF. Astrocytes, aquaporins, and other membrane transporters are key elements in brain water and CSF homeostasis. A continuous bidirectional fluid exchange at the blood brain barrier produces flow rates, which exceed the choroidal CSF production rate by far. The CSF circulation around blood vessels penetrating from the subarachnoid space into the Virchow Robin spaces provides both a drainage pathway for the clearance of waste molecules from the brain and a site for the interaction of the systemic immune system with that of the brain. Important physiological functions, for example the regeneration of the brain during sleep, may depend on CSF circulation.

Mechanisms of fluid movement into, through and out of the brain: evaluation of the evidence

Stephen B Hladky,  Margery A Barrand (2014)
Interstitial fluid (ISF) surrounds the parenchymal cells of the brain and spinal cord while cerebrospinal fluid (CSF) fills the larger spaces within and around the CNS. Regulation of the composition and volume of these fluids is important for effective functioning of brain cells and is achieved by barriers that prevent free exchange between CNS and blood and by mechanisms that secrete fluid of controlled composition into the brain and distribute and reabsorb it. Structures associated with this regular fluid turnover include the choroid plexuses, brain capillaries comprising the blood-brain barrier, arachnoid villi and perineural spaces penetrating the cribriform plate. ISF flow, estimated from rates of removal of markers from the brain, has been thought to reflect rates of fluid secretion across the blood-brain barrier, although this has been questioned because measurements were made under barbiturate anaesthesia possibly affecting secretion and flow and because CSF influx to the parenchyma via perivascular routes may deliver fluid independently of blood-brain barrier secretion. Fluid secretion at the blood-brain barrier is provided by specific transporters that generate solute fluxes so creating osmotic gradients that force water to follow. Any flow due to hydrostatic pressures driving water across the barrier soon ceases unless accompanied by solute transport because water movements modify solute concentrations. CSF is thought to be derived primarily from secretion by the choroid plexuses. Flow rates measured using phase contrast magnetic resonance imaging reveal CSF movements to be more rapid and variable than previously supposed, even implying that under some circumstances net flow through the cerebral aqueduct may be reversed with net flow into the third and lateral ventricles. Such reversed flow requires there to be alternative sites for both generation and removal of CSF. Fluorescent tracer analysis has shown that fluid flow can occur from CSF into parenchyma along periarterial spaces. Whether this represents net fluid flow and whether there is subsequent flow through the interstitium and net flow out of the cortex via perivenous routes, described as glymphatic circulation, remains to be established. Modern techniques have revealed complex fluid movements within the brain. This review provides a critical evaluation of the data.