Inadvertent positioning of suprapubic catheter in urethra: a serious complication during change of suprapubic cystostomy in a spina bifida patient - a case report 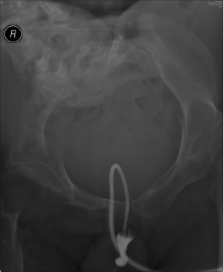 Spinal cord injury patients are at risk for developing unusual complications such as autonomic dysreflexia while changing suprapubic cystostomy. We report a male patient with spina bifida in whom the Foley catheter was placed in the urethra during change of suprapubic cystostomy with serious consequences.

This case shows that serious complications can occur during change of suprapubic catheter in patients with neuropathic bladder. After inserting a new catheter, health professionals should observe spinal cord injury patients for at least thirty minutes and ensure that (1) suprapubic catheter drains clear urine; (2) patients do not develop abdominal spasm or discomfort; (3) symptoms and signs of sepsis or autonomic dysreflexia are absent.

Comment on "Pitfall in insertion of suprapubic catheter in patients with spinal cord injury".

Pseudo-tumours of the urinary tract in patients with spinal cord injury/spina bifida.

Maged P. Mansour,  Gurpreet Singh-Ranger,  S Vaidyanathan … (2004)
To raise awareness of pseudo-tumours of urinary tract, as pseudo-tumours represent benign mass lesions simulating malignant neoplasms. Accurate diagnosis helps to avoid unnecessary surgery in spinal cord injury patients. Regional Spinal Injuries Centre, Southport, UK CASE REPORTS: Pseudo-tumour of kidney: A 58-year-old man with tetraplegia developed a right perirenal haematoma while taking warfarin; ultrasound and CT scanning showed no evidence of tumour in the right kidney. The haematoma was drained percutaneously. After 8 months, during investigation of a urine infection, ultrasound and CT scan revealed a space-occupying lesion in the mid-pole of the right kidney. CT-guided biopsy showed features suggestive of an organising haematoma; the lesion decreased in size over the next 13 months, thus supporting the diagnosis. Pseudo-tumour of urinary bladder: A frail, 34-year-old woman, who had spina bifida, marked spinal curvature and pelvic tilt, had been managing her neuropathic bladder with pads. She had recurrent vesical calculi and renal calculi. CT scan was performed, as CT would be the better means of evaluating the urinary tract in this patient with severe spinal deformity. CT scan showed a filling defect in the base of the bladder, and ultrasound revealed a sessile space-occupying lesion arising from the left bladder wall posteriorly. Flexible and, later, rigid cystoscopy and biopsy demonstrated necrotic slough and debris but no tumour. Ultrasound scan after 2 weeks showed a similar lesion, but ultrasound-guided biopsy was normal with nothing to explain the ultrasound appearances. A follow-up ultrasound scan about 7 weeks later again showed an echogenic mass, but the echogenic mass was seen to move from the left to the right side of the bladder on turning the patient, always maintaining a dependent position. The echogenic bladder mass thus represented a collection of debris, which had accumulated as a result of chronic retention of urine and physical immobility. Recognising the true, non-neoplastic nature of these lesions enabled us to avoid unnecessary surgical procedures in these patients, who were at high risk of surgical complications because of severely compromised cardiac and respiratory function.