Application of Biosensors for Detection of Pathogenic Food Bacteria: A Review 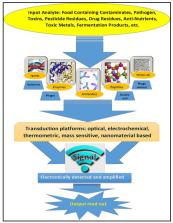 The use of biosensors is considered a novel approach for the rapid detection of foodborne pathogens in food products. Biosensors, which can convert biological, chemical, or biochemical signals into measurable electrical signals, are systems containing a biological detection material combined with a chemical or physical transducer. The objective of this review was to present the effectiveness of various forms of sensing technologies for the detection of foodborne pathogens in food products, as well as the criteria for industrial use of this technology. In this article, the principle components and requirements for an ideal biosensor, types, and their applications in the food industry are summarized. This review also focuses in detail on the application of the most widely used biosensor types in food safety.

J Arlett, E. B. Myers, M Roukes (2011)
Mechanical interactions are fundamental to biology. Mechanical forces of chemical origin determine motility and adhesion on the cellular scale, and govern transport and affinity on the molecular scale. Biological sensing in the mechanical domain provides unique opportunities to measure forces, displacements and mass changes from cellular and subcellular processes. Nanomechanical systems are particularly well matched in size with molecular interactions, and provide a basis for biological probes with single-molecule sensitivity. Here we review micro- and nanoscale biosensors, with a particular focus on fast mechanical biosensing in fluid by mass- and force-based methods, and the challenges presented by non-specific interactions. We explain the general issues that will be critical to the success of any type of next-generation mechanical biosensor, such as the need to improve intrinsic device performance, fabrication reproducibility and system integration. We also discuss the need for a greater understanding of analyte-sensor interactions on the nanoscale and of stochastic processes in the sensing environment.

Biosensors for detection of pathogenic bacteria