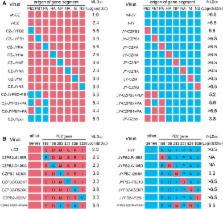 Highly pathogenic avian influenza (HPAI) H5N8 virus has caused considerable economic losses to poultry industry and poses a great threat to public health. Our previous study revealed two genetically similar HPAI H5N8 viruses displaying completely different virulence in mice. However, the molecular basis for viral pathogenicity to mammals remains unknown. Herein, we generated a series of reassortants between the two viruses and evaluated their virulence in mice. We demonstrated that 283M in PB2 is a new mammalian virulence marker for H5 viruses and that synergistic effect of amino acid residues 283M and 526R in PB2 is responsible for high virulence of the HPAI H5N8 virus. Analysis of available PB2 sequences showed that PB2 283M is highly conserved among influenza A viruses, while PB2 526R presents in most of human H3N2 and H5N1 isolates. Further study confirmed that the residues 283M and 526R had similar impacts on an HPAI H5N1 virus, suggesting that influenza viruses with both residues may replicate well in mammalian hosts. Together, these results present new insights for synergistic effect of 283M and 526R in PB2 of H5 HPAI virus on virulence to mammalian host, furthering our understanding of the pathogenesis of influenza A virus.

Menno De Jong,  Cameron P. Simmons,  Tran Thanh … (2006)
Avian influenza A (H5N1) viruses cause severe disease in humans 1,2 , but the basis for their virulence remains unclear. In vitro and animal studies indicate that high and disseminated viral replication is important for disease pathogenesis 3,4,5 . Laboratory experiments suggest that virus-induced cytokine dysregulation may contribute to disease severity 6,7,8,9 . To assess the relevance of these findings for human disease, we performed virological and immunological studies in 18 individuals with H5N1 and 8 individuals infected with human influenza virus subtypes. Influenza H5N1 infection in humans is characterized by high pharyngeal virus loads and frequent detection of viral RNA in rectum and blood. Viral RNA in blood was present only in fatal H5N1 cases and was associated with higher pharyngeal viral loads. We observed low peripheral blood T-lymphocyte counts and high chemokine and cytokine levels in H5N1-infected individuals, particularly in those who died, and these correlated with pharyngeal viral loads. Genetic characterization of H5N1 viruses revealed mutations in the viral polymerase complex associated with mammalian adaptation and virulence. Our observations indicate that high viral load, and the resulting intense inflammatory responses, are central to influenza H5N1 pathogenesis. The focus of clinical management should be on preventing this intense cytokine response, by early diagnosis and effective antiviral treatment. Supplementary information The online version of this article (doi:10.1038/nm1477) contains supplementary material, which is available to authorized users.

Y. Kawaoka,  Masato Hatta,  Patrick P. Gao … (2001)
In 1997, an H5N1 influenza A virus was transmitted from birds to humans in Hong Kong, killing 6 of the 18 people infected. When mice were infected with the human isolates, two virulence groups became apparent. Using reverse genetics, we showed that a mutation at position 627 in the PB2 protein influenced the outcome of infection in mice. Moreover, high cleavability of the hemagglutinin glycoprotein was an essential requirement for lethal infection.

A DNA transfection system for generation of influenza A virus from eight plasmids.

Diane E. Hoffmann,  Y. Kawaoka,  Christopher Webster … (2000)
We have developed an eight-plasmid DNA transfection system for the rescue of infectious influenza A virus from cloned cDNA. In this plasmid-based expression system, viral cDNA is inserted between the RNA polymerase I (pol I) promoter and terminator sequences. This entire pol I transcription unit is flanked by an RNA polymerase II (pol II) promoter and a polyadenylation site. The orientation of the two transcription units allows the synthesis of negative-sense viral RNA and positive-sense mRNA from one viral cDNA template. This pol I-pol II system starts with the initiation of transcription of the two cellular RNA polymerase enzymes from their own promoters, presumably in different compartments of the nucleus. The interaction of all molecules derived from the cellular and viral transcription and translation machinery results in the generation of infectious influenza A virus. The utility of this system is proved by the recovery of the two influenza A viruses: A/WSN/33 (H1N1) and A/Teal/HK/W312/97 (H6N1). Seventy-two hours after the transfection of eight expression plasmids into cocultured 293T and MDCK cells, the virus yield in the supernatant of the transfected cells was between 2 x 10(5) and 2 x 10(7) infectious viruses per milliliter. We also used this eight-plasmid system for the generation of single and quadruple reassortant viruses between A/Teal/HK/W312/97 (H6N1) and A/WSN/33 (H1N1). Because the pol I-pol II system facilitates the design and recovery of both recombinant and reassortant influenza A viruses, it may also be applicable to the recovery of other RNA viruses entirely from cloned cDNA.