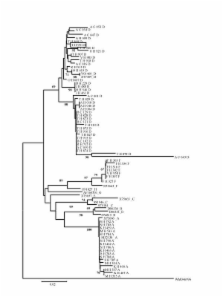 Patients under haemodialysis are considered at high risk to acquire hepatitis B virus (HBV) infection. Since few data are reported from Brazil, our aim was to assess the frequency and risk factors for HBV infection in haemodialysis patients from 22 Dialysis Centres from Santa Catarina State, south of Brazil.

This study includes 813 patients, 149 haemodialysis workers and 772 healthy controls matched by sex and age. Serum samples were assayed for HBV markers and viraemia was detected by nested PCR. HBV was genotyped by partial S gene sequencing. Univariate and multivariate statistical analyses with stepwise logistic regression analysis were carried out to analyse the relationship between HBV infection and the characteristics of patients and their Dialysis Units.

Frequency of HBV infection was 10.0%, 2.7% and 2.7% among patients, haemodialysis workers and controls, respectively. Amidst patients, the most frequent HBV genotypes were A (30.6%), D (57.1%) and F (12.2%). Univariate analysis showed association between HBV infection and total time in haemodialysis, type of dialysis equipment, hygiene and sterilization of equipment, number of times reusing the dialysis lines and filters, number of patients per care-worker and current HCV infection. The logistic regression model showed that total time in haemodialysis, number of times of reusing the dialysis lines and filters, and number of patients per worker were significantly related to HBV infection.

Frequency of HBV infection among haemodialysis patients at Santa Catarina state is very high. The most frequent HBV genotypes were A, D and F. The risk for a patient to become HBV positive increase 1.47 times each month of haemodialysis; 1.96 times if the dialysis unit reuses the lines and filters ≥ 10 times compared with haemodialysis units which reuse < 10 times; 3.42 times if the number of patients per worker is more than five. Sequence similarity among the HBV S gene from isolates of different patients pointed out to nosocomial transmission.

Yuzo Miyakawa,  R Sastrosoewignjo,  Hiroshi Okamoto … (1988)
The complete nucleotide sequences of the DNA of three hepatitis B virus (HBV) genomes of subtype adw, cloned from plasma samples of asymptomatic carriers living in the mainland and Okinawa Prefecture of Japan and Indonesia were determined. All three comprised 3215 bp and differed in sequence by only 3.9 to 5.6%. When these isolates were compared with the reported sequences of two HBV genomes of the same subtype derived from American carriers, however, the differences were greater (8.3 to 9.3% to an extent comparable with the nucleotide divergence between an HBV genome of subtype adw and that of a heterotypic subtype, such as adr, ayw or ayr. A total of 18 HBV genomes of various subtypes, including the three described here, 10 reported previously and five unpublished ones, were classified into four groups based on an inter-group divergence in nucleotide sequence of 8% or greater: group A (two adw genomes), group B (four adw), group C (three adw, four adr and one ayr) and group D (four ayw). Thus, the nine genomes of HBV subtype adw were distributed into three groups with considerably different sequences. These results indicate that the four major antigenically defined subtypes of envelope polypeptide do not reflect true genotypic variation of HBV. The fact that d to y, as well as w to r, subtypic change can be induced by an A----G point mutation at nucleotides 365 and 479 in the S gene, respectively, supports this view.

Heléne Norder,  Adam B. Robertson,  L Magnius … (2002)
The complete genomes were sequenced for ten hepatitis B virus (HBV) strains. Two of them, from Spain and Sweden, were most similar to genotype D, although encoding d specificity. Five of them were from Central America and belonged to genotype F. Two strains from Nicaragua and one from Los Angeles, USA, showed divergences of 3.1-4.1% within the small S gene from genotype F strains and were recognized previously as a divergent clade within genotype F. The complete genomes of the two genotype D strains were found to differ from published genotype D strains by 2.8-4.6%. Their S genes encoded Lys(122), Thr(127) and Lys(160), corresponding to the putative new subtype adw3 within this genotype, previously known to specify ayw2, ayw3 or, rarely, ayw4. The complete genomes of the three divergent strains diverged by 0.8-2.5% from each other, 7.2-10.2% from genotype F strains and 13.2-15.7% from other HBV strains. Since pairwise comparisons of 82 complete HBV genomes of intratypic and intertypic divergences ranged from 0.1 to 7.4% and 6.8 to 17.1%, respectively, the three sequenced strains should represent a new HBV genotype, for which the designation H is proposed. In the polymerase region, the three strains had 16 unique conserved amino acid residues not present in genotype F strains. So far, genotype H has been encountered in Nicaragua, Mexico and California. Phylogenetic analysis of the complete genomes and subgenomes of the three strains showed them clustering with genotype F but forming a separate branch supported by 100% bootstrap. Being most similar to genotype F, known to be an Amerindian genotype, genotype H has most likely split off from genotype F within the New World.