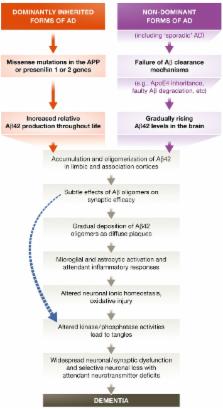 Despite continuing debate about the amyloid β‐protein (or Aβ hypothesis, new lines of evidence from laboratories and clinics worldwide support the concept that an imbalance between production and clearance of Aβ42 and related Aβ peptides is a very early, often initiating factor in Alzheimer's disease ( AD). Confirmation that presenilin is the catalytic site of γ‐secretase has provided a linchpin: all dominant mutations causing early‐onset AD occur either in the substrate (amyloid precursor protein, APP) or the protease (presenilin) of the reaction that generates Aβ. Duplication of the wild‐type APP gene in Down's syndrome leads to Aβ deposits in the teens, followed by microgliosis, astrocytosis, and neurofibrillary tangles typical of AD. Apolipoprotein E4, which predisposes to AD in > 40% of cases, has been found to impair Aβ clearance from the brain. Soluble oligomers of Aβ42 isolated from AD patients' brains can decrease synapse number, inhibit long‐term potentiation, and enhance long‐term synaptic depression in rodent hippocampus, and injecting them into healthy rats impairs memory. The human oligomers also induce hyperphosphorylation of tau at AD‐relevant epitopes and cause neuritic dystrophy in cultured neurons. Crossing human APP with human tau transgenic mice enhances tau‐positive neurotoxicity. In humans, new studies show that low cerebrospinal fluid ( CSF) Aβ42 and amyloid‐ PET positivity precede other AD manifestations by many years. Most importantly, recent trials of three different Aβ antibodies (solanezumab, crenezumab, and aducanumab) have suggested a slowing of cognitive decline in post hoc analyses of mild AD subjects. Although many factors contribute to AD pathogenesis, Aβ dyshomeostasis has emerged as the most extensively validated and compelling therapeutic target.

Ben Small,  E Corder,  D Schmechel … (1993)
The apolipoprotein E type 4 allele (APOE-epsilon 4) is genetically associated with the common late onset familial and sporadic forms of Alzheimer's disease (AD). Risk for AD increased from 20% to 90% and mean age at onset decreased from 84 to 68 years with increasing number of APOE-epsilon 4 alleles in 42 families with late onset AD. Thus APOE-epsilon 4 gene dose is a major risk factor for late onset AD and, in these families, homozygosity for APOE-epsilon 4 was virtually sufficient to cause AD by age 80.

Stephen P. Chapman,  Geoff G. Cole,  Y Harigaya … (1996)
Transgenic mice overexpressing the 695-amino acid isoform of human Alzheimer beta-amyloid (Abeta) precursor protein containing a Lys670 --> Asn, Met671 --> Leu mutation had normal learning and memory in spatial reference and alternation tasks at 3 months of age but showed impairment by 9 to 10 months of age. A fivefold increase in Abeta(1-40) and a 14-fold increase in Abeta(1-42/43) accompanied the appearance of these behavioral deficits. Numerous Abeta plaques that stained with Congo red dye were present in cortical and limbic structures of mice with elevated amounts of Abeta. The correlative appearance of behavioral, biochemical, and pathological abnormalities reminiscent of Alzheimer's disease in these transgenic mice suggests new opportunities for exploring the pathophysiology and neurobiology of this disease.

Immunization with amyloid-beta attenuates Alzheimer-disease-like pathology in the PDAPP mouse.

Dale Schenk,  Robin Barbour,  Whitney Dunn … (1999)
Amyloid-beta peptide (Abeta) seems to have a central role in the neuropathology of Alzheimer's disease (AD). Familial forms of the disease have been linked to mutations in the amyloid precursor protein (APP) and the presenilin genes. Disease-linked mutations in these genes result in increased production of the 42-amino-acid form of the peptide (Abeta42), which is the predominant form found in the amyloid plaques of Alzheimer's disease. The PDAPP transgenic mouse, which overexpresses mutant human APP (in which the amino acid at position 717 is phenylalanine instead of the normal valine), progressively develops many of the neuropathological hallmarks of Alzheimer's disease in an age- and brain-region-dependent manner. In the present study, transgenic animals were immunized with Abeta42, either before the onset of AD-type neuropathologies (at 6 weeks of age) or at an older age (11 months), when amyloid-beta deposition and several of the subsequent neuropathological changes were well established. We report that immunization of the young animals essentially prevented the development of beta-amyloid-plaque formation, neuritic dystrophy and astrogliosis. Treatment of the older animals also markedly reduced the extent and progression of these AD-like neuropathologies. Our results raise the possibility that immunization with amyloid-beta may be effective in preventing and treating Alzheimer's disease.

This is an open access article under the terms of the Creative Commons Attribution 4.0 License, which permits use, distribution and reproduction in any medium, provided the original work is properly cited.