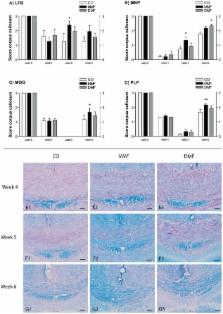 Fumaric acid esters (FAE) are a group of compounds which are currently under investigation as an oral treatment for relapsing-remitting multiple sclerosis. One of the suggested modes of action is the potential of FAE to exert a neuroprotective effect.

We have investigated the impact of monomethylfumarate (MMF) and dimethylfumaric acid (DMF) on de- and remyelination using the toxic cuprizone model where the blood-brain-barrier remains intact and only scattered T-cells and peripheral macrophages are found in the central nervous system (CNS), thus excluding the influence of immunomodulatory effects on peripheral immune cells. FAE showed marginally accelerated remyelination in the corpus callosum compared to controls. However, we found no differences for demyelination and glial reactions in vivo and no cytoprotective effect on oligodendroglial cells in vitro. In contrast, DMF had a significant inhibitory effect on lipopolysaccharide (LPS) induced nitric oxide burst in microglia and induced apoptosis in peripheral blood mononuclear cells (PBMC).

These results contribute to the understanding of the mechanism of action of fumaric acids. Our data suggest that fumarates have no or only little direct protective effects on oligodendrocytes in this toxic model and may act rather indirectly via the modulation of immune cells.

The neurotoxicant, cuprizone, as a model to study demyelination and remyelination in the central nervous system.

P Morell,  K Matsushima (2000)
Myelin of the adult CNS is vulnerable to a variety of metabolic, toxic, and autoimmune insults. That remyelination can ensue, following demyelinating insult, has been well demonstrated. Details of the process of remyelination are, however difficult to ascertain since in most experimental models of demyelination/remyelination the severity, localization of lesion site, or time course of the pathophysiology is variable from animal to animal. In contrast, an experimental model in which massive demyelination can be reproducibly induced in large areas of mouse brain is exposure to the copper chelator, cuprizone, in the diet. We review work from several laboratories over the past 3 decades, with emphasis on our own recent studies, which suggest an overall picture of cellular events involved in demyelination/remyelination. When 8 week old C57BL/6 mice are fed 0.2% cuprizone in the diet, mature olidgodendroglia are specifically insulted (cannot fulfill the metabolic demand of support of vast amounts of myelin) and go through apoptosis. This is closely followed by recruitment of microglia and phagoctytosis of myelin. Studies of myelin gene expression, coordinated with morphological studies, indicate that even in the face of continued metabolic challenge, oligodendroglial progenitor cells proliferate and invade demyelinated areas. If the cuprizone challenge is terminated, an almost complete remyelination takes place in a matter of weeks. Communication between different cell types by soluble factors may be inferred. This material is presented in the context of a model compatible with present data -- and which can be tested more rigorously with the cuprizone model. The reproducibility of the model indicates that it may allow for testing of manipulations (e.g. available knockouts or transgenics on the common genetic background, or pharmacological treatments) which may accelerate or repress the process of demyelination and or remyelination.

S E Goelz,  R Linker,  Ralf Gold … (2006)
Fumaric acid esters (FAE) have proven their therapeutic efficacy in psoriasis, a Th1 mediated skin disease. More recently, preliminary data have suggested an activity in multiple sclerosis (MS) as well. To investigate further possible mechanisms of action of these compounds in inflammatory diseases, we studied the FAE methyl hydrogen fumarate (MHF) and dimethyl fumarate (DMF) in chronic experimental autoimmune encephalomyelitis (EAE) induced by immunization of C57BL/6 mice with MOG peptide aa 35-55. Preventive treatment with these FAE was delivered twice a day by oral gavage. Both esters had a significant therapeutic effect on the disease course and histology showed a strongly reduced macrophage inflammation in the spinal cord. Multiparameter cytokine analysis from blood detected an increase of IL-10 in the treated animals. We conclude that the underlying biological activity of FAE in EAE is complex and, to elucidate the molecular mechanisms, further investigation is needed.

Publisher ID: 10-PONE-RA-15962R1
DOI: 10.1371/journal.pone.0011769
PMC ID: 2909255
PubMed ID: 20668697
Copyright statement: Moharregh-Khiabani et al. This is an open-access article distributed under the terms of the Creative Commons Attribution License, which permits unrestricted use, distribution, and reproduction in any medium, provided the original author and source are credited.