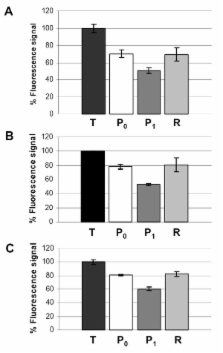 Formation and repair of DNA single-strand breaks are important parameters in the assessment of DNA damage and repair occurring in live cells. The 'Fluorimetric Detection of Alkaline DNA Unwinding (FADU)' method [Birnboim HC, Jevcak JJ. Cancer Res (1981) 41:1889–1892] is a sensitive procedure to quantify DNA strand breaks, yet it is very tedious to perform.

In order (i) to render the FADU assay more convenient and robust, (ii) to increase throughput, and (iii) to reduce the number of cells needed, we have established a modified assay version that is largely automated and is based on the use of a liquid handling device. The assay is operated in a 96-well format, thus greatly increasing throughput. The number of cells required has been reduced to less than 10,000 per data point. The threshold for detection of X-ray-induced DNA strand breaks is 0.13 Gy. The total assay time required for a typical experiment to assess DNA strand break repair is 4–5 hours.

We have established a robust and convenient method measuring of formation and repair of DNA single-strand breaks in live cells. While the sensitivity of our method is comparable to current assays, throughput is massively increased while operator time is decreased.

Naresh Redhu (2000)
This report describes a part of the evolution of microgel electrophoresis in the author's laboratory for the last 15 years. It also describes the importance of estimation of DNA single and double strand breaks, DNA crosslinks and apoptosis. Some experiments based on each methodology are included here. A new protocol for rapid and efficient precipitation of DNA in microgel is included. A step by step description of laboratory protocol is also included.

Sensitivity of the FPG protein towards alkylation damage in the comet assay.

H. Hoffmann,  Irina Bonzheim,  Petra Schütz … (2004)
The comet assay (single cell gel electrophoresis) is widely used for the evaluation of DNA-damaging effects in genotoxicity testing and population monitoring. In its standard version at pH >13, DNA double strand breaks (DSB), DNA single strand breaks (SSB) and alkali-labile sites (ALS) lead to increased DNA migration. At reduced pH (12.5-12.1) the expression of ALS as SSB can be eliminated and the effect of SSB only can be identified. Specific endonucleases have been used to characterize specific classes of DNA damage. The formamido pyrimidine glycosylase (FPG) protein has been used to assess oxidative DNA base damage because it detects 8-OH guanine and other oxidatively damaged purines. Here, we show that the FPG protein also detects alkylation damage with high sensitivity in the comet assay. Human whole blood, isolated lymphocytes and V79 cells were treated with alkylating agents and post-incubated with FPG. FPG strongly enhanced MMS- and EMS-induced DNA damage but had no significant effect on ENU-induced DNA damage, indicating that the amount of N-7 guanine alkylation is responsible for the observed effect. Reducing the pH during alkali unwinding and electrophoresis to 12.5 to avoid the contribution of ALS to the comet assay effects, strongly decreased the sensitivity of the comet assay with and without FPG treatment and prevented DNA migration. We conclude that enhanced DNA effects in the comet assay by FPG after exposure to genotoxins with unknown mode of action should not directly be regarded as evidence for the presence of oxidative damage. Furthermore, reducing the pH leads to a considerable loss in sensitivity and should not be used in biomonitoring and other applications which require a sensitive protocol.

J Jevcak,  H Birnboim (1981)
DNA strand breaks can be detected with great sensitivity by exposing crude cell lysates to alkaline solutions and monitoring the rate of strand unwinding. As little as one strand break per chromosome can be detected. Previous methods for measuring strand unwinding have required physical separation of single- from double-stranded molecules. We now describe conditions under which unwinding can be monitored directly using a fluorescent dye, thus greatly simplifying the analysis. Breaks due to irradiation of blood samples by 60Co gamma-rays at doses as low as 0.05 to 0.1 gray (5 to 10 rads) were detectable. Rapid rejoining of strand breaks during in vitro incubation at 37 degrees could readily be observed following a dose of one gray. Since the procedure is very rapid and cells can be analyzed directly without the requirement for culturing or radiolabeling, the procedure could be useful in cancer chemotherapy if in vivo damage is to be monitored or for testing the in vitro sensitivity of cells to drugs.