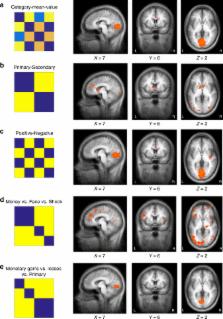 An extensive literature from cognitive neuroscience examines the neural representation of value, but interpretations of these existing results are often complicated by the potential confound of saliency. At the same time, recent attempts to dissociate neural signals of value and saliency have not addressed their relationship with category information. Using a multi-category valuation task that incorporates rewards and punishments of different nature, we identify distributed neural representation of value, saliency, and category during outcome anticipation. Moreover, we reveal category encoding in multi-voxel blood-oxygen-level-dependent activity patterns of the vmPFC and the striatum that coexist with value signals. These results help clarify ambiguities regarding value and saliency encoding in the human brain and their category independence, lending strong support to the neural “common currency” hypothesis. Our results also point to potential novel mechanisms of integrating multiple aspects of decision-related information.

Stimulus category, saliency and value all affect the subjective value estimates that guide our decisions. Here, the authors systematically vary their stimuli along these three dimensions in humans and report category independent encoding of values and saliency in the vmPFC and striatum.

Nikolaus Kriegeskorte, Rainer Goebel, Peter A. Bandettini (2006)
The development of high-resolution neuroimaging and multielectrode electrophysiological recording provides neuroscientists with huge amounts of multivariate data. The complexity of the data creates a need for statistical summary, but the local averaging standardly applied to this end may obscure the effects of greatest neuroscientific interest. In neuroimaging, for example, brain mapping analysis has focused on the discovery of activation, i.e., of extended brain regions whose average activity changes across experimental conditions. Here we propose to ask a more general question of the data: Where in the brain does the activity pattern contain information about the experimental condition? To address this question, we propose scanning the imaged volume with a "searchlight," whose contents are analyzed multivariately at each location in the brain.

Camillo Padoa-Schioppa, John Assad (2006)
Economic choice is the behaviour observed when individuals select one among many available options. There is no intrinsically 'correct' answer: economic choice depends on subjective preferences. This behaviour is traditionally the object of economic analysis and is also of primary interest in psychology. However, the underlying mental processes and neuronal mechanisms are not well understood. Theories of human and animal choice have a cornerstone in the concept of 'value'. Consider, for example, a monkey offered one raisin versus one piece of apple: behavioural evidence suggests that the animal chooses by assigning values to the two options. But where and how values are represented in the brain is unclear. Here we show that, during economic choice, neurons in the orbitofrontal cortex (OFC) encode the value of offered and chosen goods. Notably, OFC neurons encode value independently of visuospatial factors and motor responses. If a monkey chooses between A and B, neurons in the OFC encode the value of the two goods independently of whether A is presented on the right and B on the left, or vice versa. This trait distinguishes the OFC from other brain areas in which value modulates activity related to sensory or motor processes. Our results have broad implications for possible psychological models, suggesting that economic choice is essentially choice between goods rather than choice between actions. In this framework, neurons in the OFC seem to be a good candidate network for value assignment underlying economic choice.

Nikolaus Kriegeskorte, Marieke Mur, Peter A. Bandettini (2009)
A fundamental challenge for systems neuroscience is to quantitatively relate its three major branches of research: brain-activity measurement, behavioral measurement, and computational modeling. Using measured brain-activity patterns to evaluate computational network models is complicated by the need to define the correspondency between the units of the model and the channels of the brain-activity data, e.g., single-cell recordings or voxels from functional magnetic resonance imaging (fMRI). Similar correspondency problems complicate relating activity patterns between different modalities of brain-activity measurement (e.g., fMRI and invasive or scalp electrophysiology), and between subjects and species. In order to bridge these divides, we suggest abstracting from the activity patterns themselves and computing representational dissimilarity matrices (RDMs), which characterize the information carried by a given representation in a brain or model. Building on a rich psychological and mathematical literature on similarity analysis, we propose a new experimental and data-analytical framework called representational similarity analysis (RSA), in which multi-channel measures of neural activity are quantitatively related to each other and to computational theory and behavior by comparing RDMs. We demonstrate RSA by relating representations of visual objects as measured with fMRI in early visual cortex and the fusiform face area to computational models spanning a wide range of complexities. The RDMs are simultaneously related via second-level application of multidimensional scaling and tested using randomization and bootstrap techniques. We discuss the broad potential of RSA, including novel approaches to experimental design, and argue that these ideas, which have deep roots in psychology and neuroscience, will allow the integrated quantitative analysis of data from all three branches, thus contributing to a more unified systems neuroscience.