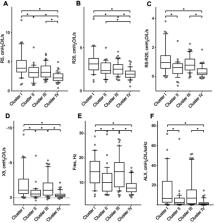 The diagnosis and severity of chronic obstructive pulmonary disease (COPD) are defined by airflow limitation using spirometry. However, COPD has diverse clinical features, and several phenotypes based on non-spirometric data have been investigated. To identify novel phenotypes of COPD using radiologic data obtained by three-dimensional computed tomography (3D-CT).

The inner luminal area and wall thickness of third- to sixth-generation bronchi and the percentage of the low-attenuation area (less than −950 HU) of the lungs were measured using 3D-CT in patients with COPD. Using the radiologic data, hierarchical clustering was performed. Respiratory reactance and resistance were measured to evaluate functional differences among the clusters.

The 3D-CT-based radiologic phenotypes were associated with the clinical features of COPD. Measurement of respiratory resistance and reactance may help to identify phenotypic differences.

H Sakai,  Michiaki Mishima,  Kazuo Chin … (2000)
Chronic obstructive pulmonary disease (COPD) is characterized by the presence of airflow obstruction caused by emphysema or airway narrowing, or both. Low attenuation areas (LAA) on computed tomography (CT) have been shown to represent macroscopic or microscopic emphysema, or both. However CT has not been used to quantify the airway abnormalities in smokers with or without airflow obstruction. In this study, we used CT to evaluate both emphysema and airway wall thickening in 114 smokers. The CT measurements revealed that a decreased FEV(1) (%predicted) is associated with an increase of airway wall area and an increase of emphysema. Although both airway wall thickening and emphysema (LAA) correlated with measurements of lung function, stepwise multiple regression analysis showed that the combination of airway and emphysema measurements improved the estimate of pulmonary function test abnormalities. We conclude that both CT measurements of airway dimensions and emphysema are useful and complementary in the evaluation of the lung of smokers.

Yuya Onodera,  Katsura Nagai,  Hironi Makita … (2006)
Chronic obstructive pulmonary disease (COPD) is characterized by airflow limitation caused by emphysema and/or airway narrowing. Computed tomography has been widely used to assess emphysema severity, but less attention has been paid to the assessment of airway disease using computed tomography. To obtain longitudinal images and accurately analyze short axis images of airways with an inner diameter>or=2 mm located anywhere in the lung with new software for measuring airway dimensions using curved multiplanar reconstruction. In 52 patients with clinically stable COPD (stage I, 14; stage II, 22; stage III, 14; stage IV, 2), we used the software to analyze the relationship of the airflow limitation index (FEV1, % predicted) with the airway dimensions from the third to the sixth generations of the apical bronchus (B1) of the right upper lobe and the anterior basal bronchus (B8) of the right lower lobe. Airway luminal area (Ai) and wall area percent (WA%) were significantly correlated with FEV1 (% predicted). More importantly, the correlation coefficients (r) improved as the airways became smaller in size from the third (segmental) to sixth generations in both bronchi (Ai: r=0.26, 0.37, 0.58, and 0.64 for B1; r=0.60, 0.65, 0.63, and 0.73 for B8). We are the first to use three-dimensional computed tomography to demonstrate that airflow limitation in COPD is more closely related to the dimensions of the distal (small) airways than proximal (large) airways.