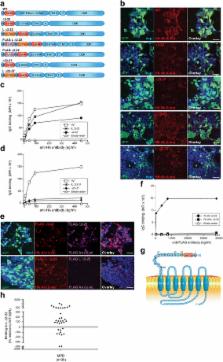 Anti-Dopamine-2 receptor (D2R) antibodies have been recently identified in a subgroup of children with autoimmune movement and psychiatric disorders, however the epitope(s) and mechanism of pathogenicity remain unknown. Here we report a major biological role for D2R extracellular N-terminus as a regulator of receptor surface availability, and as a major epitope targeted and impaired in brain autoimmunity. In transfected human cells, purified anti-D2R antibody from patients specifically and significantly reduced human D2R surface levels. Next, human D2R mutants modified in their extracellular domains were subcloned, and we analyzed the region bound by 35 anti-D2R antibody-positive patient sera using quantitative flow cytometry on live transfected cells. We found that N-glycosylation at amino acids N5 and/or N17 was critical for high surface expression in interaction with the last 15 residues of extracellular D2R N-terminus. No anti-D2R antibody-positive patient sera bound to the three extracellular loops, but all patient sera (35/35) targeted the extracellular N-terminus. Overall, patient antibody binding was dependent on two main regions encompassing amino acids 20 to 29, and 23 to 37. Residues 20 to 29 contributed to the majority of binding (77%, 27/35), among which 26% (7/27) sera bound to amino acids R20, P21, and F22, 37% (10/27) patients were dependent on residues at positions 26 and 29, that are different between humans and mice, and 30% (8/27) sera required R20, P21, F22, N23, D26, and A29. Seven patient sera bound to the region 23 to 37 independently of D26 and A29, but most sera exhibited N-glycosylation-independent epitope recognition at N23. Interestingly, no evident segregation of binding pattern according to patient clinical phenotype was observed. D2R N-terminus is a central epitope in autoimmune movement and psychiatric disorders and this knowledge could help the design of novel specific immune therapies tailored to improve patient outcome.

G. Hughes,  Josep Dalmau,  Doria R. Gordon … (2010)
We recently described a severe, potentially lethal, but treatment-responsive encephalitis that associates with autoantibodies to the NMDA receptor (NMDAR) and results in behavioral symptoms similar to those obtained with models of genetic or pharmacologic attenuation of NMDAR function. Here, we demonstrate that patients' NMDAR antibodies cause a selective and reversible decrease in NMDAR surface density and synaptic localization that correlates with patients' antibody titers. The mechanism of this decrease is selective antibody-mediated capping and internalization of surface NMDARs, as Fab fragments prepared from patients' antibodies did not decrease surface receptor density, but subsequent cross-linking with anti-Fab antibodies recapitulated the decrease caused by intact patient NMDAR antibodies. Moreover, whole-cell patch-clamp recordings of miniature EPSCs in cultured rat hippocampal neurons showed that patients' antibodies specifically decreased synaptic NMDAR-mediated currents, without affecting AMPA receptor-mediated currents. In contrast to these profound effects on NMDARs, patients' antibodies did not alter the localization or expression of other glutamate receptors or synaptic proteins, number of synapses, dendritic spines, dendritic complexity, or cell survival. In addition, NMDAR density was dramatically reduced in the hippocampus of female Lewis rats infused with patients' antibodies, similar to the decrease observed in the hippocampus of autopsied patients. These studies establish the cellular mechanisms through which antibodies of patients with anti-NMDAR encephalitis cause a specific, titer-dependent, and reversible loss of NMDARs. The loss of this subtype of glutamate receptors eliminates NMDAR-mediated synaptic function, resulting in the learning, memory, and other behavioral deficits observed in patients with anti-NMDAR encephalitis.

Structure of the human dopamine D3 receptor in complex with a D2/D3 selective antagonist.

Lei Shi,  Ya-Wei Liu,  G Han … (2010)
Dopamine modulates movement, cognition, and emotion through activation of dopamine G protein-coupled receptors in the brain. The crystal structure of the human dopamine D3 receptor (D3R) in complex with the small molecule D2R/D3R-specific antagonist eticlopride reveals important features of the ligand binding pocket and extracellular loops. On the intracellular side of the receptor, a locked conformation of the ionic lock and two distinctly different conformations of intracellular loop 2 are observed. Docking of R-22, a D3R-selective antagonist, reveals an extracellular extension of the eticlopride binding site that comprises a second binding pocket for the aryl amide of R-22, which differs between the highly homologous D2R and D3R. This difference provides direction to the design of D3R-selective agents for treating drug abuse and other neuropsychiatric indications.

Mar Petit-Pedrol,  Frank Leypoldt,  Rafael Maldonado … (2014)
Anti-N-methyl D-aspartate receptor (NMDAR) encephalitis is a severe neuropsychiatric disorder that associates with prominent memory and behavioural deficits. Patients' antibodies react with the N-terminal domain of the GluN1 (previously known as NR1) subunit of NMDAR causing in cultured neurons a selective and reversible internalization of cell-surface receptors. These effects and the frequent response to immunotherapy have suggested an antibody-mediated pathogenesis, but to date there is no animal model showing that patients' antibodies cause memory and behavioural deficits. To develop such a model, C57BL6/J mice underwent placement of ventricular catheters connected to osmotic pumps that delivered a continuous infusion of patients' or control cerebrospinal fluid (flow rate 0.25 µl/h, 14 days). During and after the infusion period standardized tests were applied, including tasks to assess memory (novel object recognition in open field and V-maze paradigms), anhedonic behaviours (sucrose preference test), depressive-like behaviours (tail suspension, forced swimming tests), anxiety (black and white, elevated plus maze tests), aggressiveness (resident-intruder test), and locomotor activity (horizontal and vertical). Animals sacrificed at Days 5, 13, 18, 26 and 46 were examined for brain-bound antibodies and the antibody effects on total and synaptic NMDAR clusters and protein concentration using confocal microscopy and immunoblot analysis. These experiments showed that animals infused with patients' cerebrospinal fluid, but not control cerebrospinal fluid, developed progressive memory deficits, and anhedonic and depressive-like behaviours, without affecting other behavioural or locomotor tasks. Memory deficits gradually worsened until Day 18 (4 days after the infusion stopped) and all symptoms resolved over the next week. Accompanying brain tissue studies showed progressive increase of brain-bound human antibodies, predominantly in the hippocampus (maximal on Days 13-18), that after acid extraction and characterization with GluN1-expressing human embryonic kidney cells were confirmed to be against the NMDAR. Confocal microscopy and immunoblot analysis of the hippocampus showed progressive decrease of the density of total and synaptic NMDAR clusters and total NMDAR protein concentration (maximal on Day 18), without affecting the post-synaptic density protein 95 (PSD95) and α-amino-3-hydroxy-5-methyl-4-isoxazolepropionic acid (AMPA) receptors. These effects occurred in parallel with memory and other behavioural deficits and gradually improved after Day 18, with reversibility of symptoms accompanied by a decrease of brain-bound antibodies and restoration of NMDAR levels. Overall, these findings establish a link between memory and behavioural deficits and antibody-mediated reduction of NMDAR, provide the biological basis by which removal of antibodies and antibody-producing cells improve neurological function, and offer a model for testing experimental therapies in this and similar disorders. © The Author (2014). Published by Oxford University Press on behalf of the Guarantors of Brain. All rights reserved. For Permissions, please email: journals.permissions@oup.com.