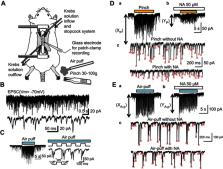 Methods: Male Sprague–Dawley rats (6–8 weeks, 200–300 g, n=21) were anesthetized. The lumbar spinal cord was exposed from L3 to L5; subsequently, the rats were fixed to a stereotaxic apparatus. The electrode was advanced at an angle of 30–45 degrees into the SG using a micromanipulator. We recorded excitatory post-synaptic currents (EPSC). Under these conditions, innocuous or noxious mechanical stimuli were applied to the receptive ﬁeld of the ipsilateral hindlimb with or without NA, respectively.

Conclusion: Our present data indicate that NA acts on noxious and innocuous mechanical transmission in the SG. Considering the distinct sensory inputs to the SG, the different actions of NA on the transmission of sensory information imply that NA exerts its analgesic effects in a manner more complicated than previously believed.

Lishi Li,  Michael Rutlin,  Victoria E. Abraira … (2011)
Innocuous touch of the skin is detected by distinct populations of neurons, the low-threshold mechanoreceptors (LTMRs), which are classified as Aβ-, Aδ-, and C-LTMRs. Here, we report genetic labeling of LTMR subtypes and visualization of their relative patterns of axonal endings in hairy skin and the spinal cord. We found that each of the three major hair follicle types of trunk hairy skin (guard, awl/auchene, and zigzag hairs) is innervated by a unique and invariant combination of LTMRs; thus, each hair follicle type is a functionally distinct mechanosensory end organ. Moreover, the central projections of Aβ-, Aδ-, and C-LTMRs that innervate the same or adjacent hair follicles form narrow LTMR columns in the dorsal horn. These findings support a model of mechanosensation in which the activities of Aβ-, Aδ-, and C-LTMRs are integrated within dorsal horn LTMR columns and processed into outputs that underlie the perception of myriad touch sensations. Copyright © 2011 Elsevier Inc. All rights reserved.

Toshiharu Yasaka,  Sheena Y.X. Tiong,  David Hughes … (2010)
Lamina II contains a large number of interneurons involved in modulation and transmission of somatosensory (including nociceptive) information. However, its neuronal circuitry is poorly understood due to the difficulty of identifying functional populations of interneurons. This information is important for understanding nociceptive processing and for identifying changes that underlie chronic pain. In this study, we compared morphology, neurotransmitter content, electrophysiological and pharmacological properties for 61 lamina II neurons recorded in slices from adult rat spinal cord. Morphology was related to transmitter content, since islet cells were GABAergic, while radial and most vertical cells were glutamatergic. However, there was considerable diversity among the remaining cells, some of which could not be classified morphologically. Transmitter phenotype was related to firing pattern, since most (18/22) excitatory cells, but few (2/23) inhibitory cells had delayed, gap or reluctant patterns, which are associated with A-type potassium (I A) currents. Somatostatin was identified in axons of 14/24 excitatory neurons. These had variable morphology, but most of those tested showed delayed-firing. Excitatory interneurons are therefore likely to contribute to pain states associated with synaptic plasticity involving I A currents. Although noradrenaline and serotonin evoked outward currents in both inhibitory and excitatory cells, somatostatin produced these currents only in inhibitory neurons, suggesting that its pro-nociceptive effects are mediated by disinhibition. Our results demonstrate that certain distinctive populations of inhibitory and excitatory interneuron can be recognised in lamina II. Combining this approach with identification of other neurochemical markers should allow further clarification of neuronal circuitry in the superficial dorsal horn.

Antti Pertovaara (2006)
Norepinephrine is involved in intrinsic control of pain. Main sources of norepinephrine are sympathetic nerves peripherally and noradrenergic brainstem nuclei A1-A7 centrally. Peripheral norepinephrine has little influence on pain in healthy tissues, whereas in injured tissues it has variable effects, including aggravation of pain. Its peripheral pronociceptive effect has been associated with injury-induced expression of novel noradrenergic receptors, sprouting of sympathetic nerve fibers, and pronociceptive changes in the ionic channel properties of primary afferent nociceptors, while an interaction with the immune system may contribute in part to peripheral antinociception induced by norepinephrine. In the spinal cord, norepinephrine released from descending pathways suppresses pain by inhibitory action on alpha-2A-adrenoceptors on central terminals of primary afferent nociceptors (presynaptic inhibition), by direct alpha-2-adrenergic action on pain-relay neurons (postsynaptic inhibition), and by alpha-1-adrenoceptor-mediated activation of inhibitory interneurons. Additionally, alpha-2C-adrenoceptors on axon terminals of excitatory interneurons of the spinal dorsal horn possibly contribute to spinal control of pain. At supraspinal levels, the pain modulatory effect by norepinephrine and noradrenergic receptors has varied depending on many factors such as the supraspinal site, the type of the adrenoceptor, the duration of the pain and pathophysiological condition. While in baseline conditions the noradrenergic system may have little effect, sustained pain induces noradrenergic feedback inhibition of pain. Noradrenergic systems may also contribute to top-down control of pain, such as induced by a change in the behavioral state. Following injury or inflammation, the central as well as peripheral noradrenergic system is subject to various plastic changes that influence its antinociceptive efficacy.