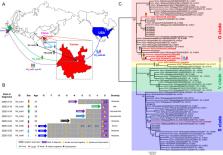 Journal: The Journal of Infection

Publisher: Published by Elsevier Ltd on behalf of The British Infection Association.

Libin Chen,  Juncheng Cai,  Qiuyan Lin … (2020)
Dear editor, Recently, a letter in your journal predicted the trend of the spread of the novel coronavirus disease 2019 (COVID-19) in China, an illness caused by the severe acute respiratory syndrome coronavirus 2 (SARS-CoV-2), 1 , 2 would end after March 20, 2020. 3 Currently, the COVID-19 has spread around the globe, with the center of the epidemic shifting from China to Europe and the United States. 4 As of March 24, 2020, a total of 372,757 cases have been confirmed worldwide, with a death toll of 16,231 (WHO, Coronavirus disease 2019 Situation Report 64, March 24, 2020). Italy, in particular, had thus far diagnosed 63,927 patients, 6077 of whom had lost their lives. That translates to a mortality rate of 9.51%, which is more than twice as high as that of China's 4.02% (3283/81,747). The greater share of elderly patients with confirmed COVID-19 infection in Italy along with the population's significantly higher median age may partly explain the differences in cases and case-fatality rates between the two nations. 5 Countries such as the United States (42,164 cases), Spain (33,089 cases), Germany (29,212 cases), and France (19,615 cases) have seen an explosive increase in confirmed cases, with the rate of growth showing no hint of slowing down. For China—the initial epicenter of the outbreak—two stages of the epidemic have passed (Figure 1 A). The first stage is the outbreak period (December 31, 2019 to February 29, 2020), which entailed the period from the first detection of cases to the peak of the epidemic which saw a rapid increase in the number of confirmed cases, and to the time when the growth rate slowed down to less than 200 new confirmed cases per day. In the second stage, which lasted from March 1, 2020 to March 21, 2020, the number of existing cases in most Chinese provinces was reduced to less than 10, respectively, whilst the number of newly confirmed cases in Wuhan, Hubei province, the worst-hit city, was slowly approaching zero. It was during this stage—more specifically on the March 4—that foreign imported cases to appear. During these two stages, the Chinese government, its populous, and its medical professionals had managed to stabilized the deadly epidemic with great deliberation and sacrifices. 6 Currently, however, the situation in China has entered its third stage—recontamination through close contact with foreign infection, as demonstrated by the emergence of second-generation case originated from imported cases first reported in Guangzhou, Guangdong province on March 22, 2020 (Figure 1B). As of March 24, 2020, there were 427 imported cases and 3 second-generation cases originated from imported cases, one each in Beijing, Shanghai and Guangzhou (National Health Commission of the People's Republic of China). It shows that China needs to pay more attention to the control of imported cases and reflect on the measures previously taken against imported cases. Fig. 1 Three stages of China's COVID-19 epidemic (updated on March 24, 2020). (A) The first and second stages of China's COVID-19 epidemic. (B) The third stage of China's COVID-19 epidemic. Data for all cases are from World Health Organization (https://www.who.int/emergencies/diseases/novel-coronavirus-2019) and National Health Commission of the People's Republic of China (http://www.nhc.gov.cn). Fig 1 Due to the outbreak of COVID-19 in Europe and America, many overseas Chinese or ethnic Chinese had chosen to return to China where the epidemic had remained under control, many of whom were themselves COVID-19 patients without realizing that they had been infected. As a result, imported cases from outside of China appeared in early March and began to increase sharply in mid-March (Figure 1B). China is now facing increasing pressure in the face of import cases from overseas, especially in cities that a are international travel hubs such as Beijing, Shanghai and Guangzhou. On the onset of this surge in the number of overseas patients, the operational capacity of airports with high volume of international flights was not capable of efficient screening for every arrival, resulting in a large number of passenger flow jams in the airport lobby, and subsequently causing high risk of infection. Therefore, the conundrum regarding the control over overseas imported cases as well as the prevention of a second epidemic outbreak that is fast approaching is a problem that China needs to pay special attention to, especially after the first second-generation case imported from abroad had appeared. It shows that the current prevention and control measures have yet proven to be consummate. As the global epidemic continues in the outbreak period, more and more overseas Chinese citizens or ethnic Chinese, even non-Chinese, will choose to come to China to escape from the epidemic. 7 The government has shortened the processing time for immigration procedures and required all arrivals from other countries to be quarantined. However, the Chinese government needs to ensure that every overseas arrival would have passed a quarantine period of at least 14 days, and tested negative to COVID-19 before they can conduct social activities in the country, and such measures are not easy to implement. China has managed to control the outbreak of the domestic epidemic, but there are still new issues waiting for them to deal with. In addition, China's outstanding performance in the first stage of the epidemic has provided the world with valuable insights and earned two months of breathing room for the world to respond the novel virus. However, due to the lack of attention and the spread of misinformation regarding COVID-19 in many countries, the disease has seriously threatened the whole world, 4 bringing China's epidemic to the third stage. Therefore, based on the One Health model, 8 the outbreak of COVID-19 should concern all humankind, for no country can survive alone. The real victory over COVID-19 will require concerted efforts from around the globe. Declaration of Competing Interest None.

Boyan Lv,  Zhongyan Li,  Yajuan Chen … (2020)
Highlights • CFR in Iran in the early stage of the outbreak is highest among all the countries. • CFRs in the USA and Italy are similar to Hubei Province in the early stage. • CFRs in South Korea are similar to outside Hubei, indicating less severity. • Our findings highlight the severity of outbreaks globally, particular in the USA.

These first authors contributed equally in this work